Maybe I’m exhausting this game but as I look more and more into it, the game grows and grows in intrigue. I’ve quantified the game to an almost boring extent below but here’s the most interesting stat I’ve discovered amongst all of my research:

And how awesome is that header image? I’m about to yak forever about UCLA taking jump shots and in that picture there are TWO BRUINS TAKING JUMPERS!  Anyhow, chew on all this cud and make your own decision about who wins.

Transition Stuff: This is a part of the game I’m finding increasingly more fascinating. It projects to play out differently than the mid-range jumpers conundrum. That’s the scenario I’ve mistakenly called “unstoppable object vs. immovable force.” This feature of the game best fits that analogy as UCLA does it really well and Arizona stops it really well. See how that works? Here’s how the whole thing looks: 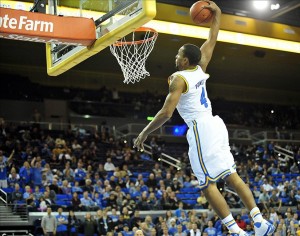 I don’t really discuss Norman, but he’s an athlete, too

UCLA gets 30.8% of their offense in transition. That’s the 11th most in ‘Merica. Additionally, they have the third best steal percentage in the nation (or 11 picks per contest) which  leads to that high transition offense. They have the likes of Zach LaVine whom I will celebrate on these pages below via GIF. He’s a long athletic wing-type who can get into lanes. And jump. I’ve read and listened to and watched the Bruins’ ability to get into places they shouldn’t in order to take basketballs away from people. Jordan Adams snags the third most steals per game amongst all of the basketball players (3.5 per). The Bruins use these take aways to run out and try for easy shots. Amongst the top-25 teams getting out into transition (as per % of shots in), UCLA has the highest FG%. To break it down: steal, run, bucket. It’s pretty simple.

Meanwhile, Arizona allows teams to get into transition on just 17.4% of their possessions That’s the ninth best transition D we’ve seen this season. It’s well noted what a great rebounding team Arizona is and that helps. But here’s another stat suggesting Arizona’s defense is more Cheddar than Swiss: 13.6% of their defensive possessions are forced into the after 30 seconds of shot clock. I struggle to contextualize this as hoop-math doesn’t rank that number nationally, but because I love you guys I’ve looked through the whole Pac-12 (the things I do for us). Arizona forces the second most late possessions (Stanford leads) in the conference. One more stat regarding timing: Arizona forces the longest possessions amongst all D-1 teams. The average possession for a Wildcat opponent is 20.5 seconds per KenPom. Thursday night that number will be tested by UCLA’s seventh swiftest offense (14.6 seconds). I’m telling you guys: unstoppable force:immovable object::UCLA transition O:AZ transition D.

So what happens? I dunno, but Arizona isn’t GREAT at taking care of the basketball (a pedestrian 106th rating in TO%) so I’m seeing an opportunity for UCLA to do what they do best (stealrunbucket).

Shooting Stuff: I’ve examined this one in many places and to many faces. I’m diving into it one more time because UCLA is like kryptonite. Arizona Superman. No one shoots jumpers anymore. But the Bruins do.

Arizona plays the pack line defense. Their version of it is meant to protect the rim (15.9% of shots there) and close out on threes (29% of shots at a 28.2% FG%). That leaves the two-point jumper; neither an easy layup nor a valuable three-pointer. Teams are forced to take 54.5% of their offense there when they play the Wildcats. UCLA, meanwhile, has the fifth highest FG% on 2pt jumpers (44.7%), shoots very few threes (26.9% of their offense), and has Kyle Anderson and Jordan Adams. Let me elaborate on those two and it won’t take long: they make 50% of their 2-pt jumpers. To further synopsize, Arizona forces jump shots, UCLA makes jump shots. WHAT GIVES???? 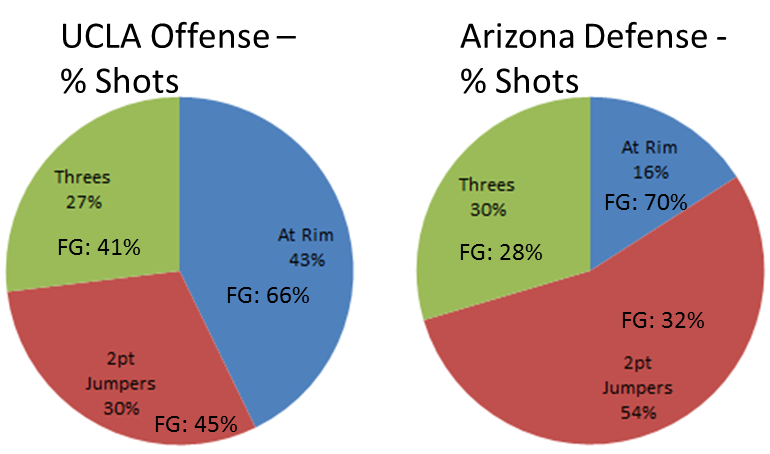 But this is where I might want to elaborate with some less quantifiable information. Namely, I can’t explain to you that Kyle Anderson hasn’t been defended by the likes of an Aaron Gordon. He’s a 6’9″ freak athlete capable of guarding any and everything. As uniquely talented as Anderson is on the offensive side of things, Gordon is as unique on the defensive side. He and fellow freshman phenom, Rondae Hollis-Jefferson, will pose a challenge of athletic length Anderson has yet to see this year. I’m also keeping an eye on this Jordan Adams character. In last season’s he touched the ball game, Adams destroyed the Wildcats: 6-13 for 24 points including 11 FTs. All in Mark Lyons’ eye because Nick Johnson was busy beheading the Bruins, holding Larry Drew II to zero points and just 4 assists. When Johnson drew the Adams straw a few weeks prior in Pauley it was a different story. Adams was 1-5 for 6 points. Yes, I’ll be keeping an eye on that matchup, too.

What’s more, UCLA is fairly effective at and around the rim. They’re connecting on greater than 65% of their shots rim-side of which 42.8% are taken. Solid stuff, but wait! There’s more! The Bruins have the second fewest percentage of shots blocked. Likely helping them get those buckets. While the Wildcats don’t block a ton of shots, they dismiss the 55th best percentage of shots. Food for Bruin thought.

More but Different Shooting Stuff: Howland talked about his team’s lack of athleticism as the reason for poor defense. He never coached Zach LaVine:

The point here is that perhaps Alford has better embraced the overarching lack of athleticism and will play a zone. And in such a defensive schematic, Alford is willing to let teams shoot the three pointer. Teams are shooting the fifth highest percentage of threes against the Bruins (43.8%). The flip side of the coin – and the long perceived achilles heel of these Wildcats – is that they don’t shoot many threes. There are a few reasons for that:

But this is where the game gets really interesting. UCLA really doesn’t want to get beat down low. It’s why their entire team spends defensive possessions in the paint. But because Arizona won’t soon succumb to another team’s defensive philosophy, I think Brandon Ashley and Gabe York become the games most important players. Or at least offensively. You know what you’re getting out of Arizona’s backcourt: McConnell and Johnson can keep a team fairly honest from deep. Johnson does a great job slashing and can hit an open three. McConnell has shown he can hit threes (42% career 3 shooter). But he’s cold as ice since moving to Tucson, shooting just 29%. Ultimately, however, McConnell’s role is to just feed the TarAshDonAe monster. That’s why I think York, off the bench, is critical. He can keep a team like UCLA honest – a secret weapon of sorts not unlike what Kenny Kaminski did on Tuesday night for Michigan State. Off the bench, the sharp shooter played 16 minutes and went 3-4 from deep, including the go-ahead-and-never-look-back three in overtime. But York is just icing on the cake, really. He’s no defensive specialist and this game is ultimately going to be won by Arizona’s defense. Will he even see the floor? Ashley, on the other hand and to refocus on offense, is the kind of dynamic post player that can really expose UCLA’s rebounding ineptitude and lack of athleticism. Ever seen a Wear child do this:

Final Thoughts on the Matter: Is it 6pm PST yet?

6 thoughts on “More on UCLA-Arizona: Stats!”