The point here is that teams have a definitive fingerprint. They try to do specific things that either demonstrate their strengths or expose an opponent’s weaknesses. When you can exact that strategy, in theory, you stand to be successful. You play your brand of basketball to not let them play theirs. Coaches make money for this stuff. They also get fired.

So Thursday’s game was fascinating as I threw up all over the stats trying to figure out who was going to do what to win. These two teams match up in such a way that it truly was going to boil down to execution. Who could do what they do, just better?

Defensively, as I told you yesterday, the Wildcats force this: 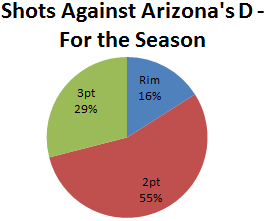 And then on Thursday they did this: 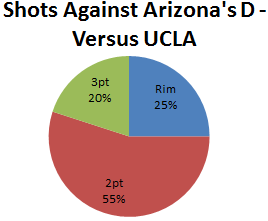 Not the same graph twice, I swear. Sure, UCLA got a touch more to the rim – a tribute to their very good ability to get in transition and force turnovers – but Arizona played their defensive game. Meaning UCLA did not play their offensive game. Against Arizona, teams are shooting an eFG% of just 40.9% – third best in the nation. UCLA meanwhile  has the ninth best eFG% in the nation (57.1%). I bet you can guess what I’m about to tell you. 43.1%. Some say like a boss. I’ll say like #1. Tomato, tomato (that idiom doesn’t play out so well in print, does it?).

But we already knew defense was Arizona’s bread and butter. That’s their strong suit. It’s their flaunted strength to get you out of your effective strategy. Whatever it may be.

But what would they do on the offensive end? UCLA was going to force Arizona to shoot threes in that zone of theirs and so Arizona went ahead and took half of their shots at the rim. Yes, the Wildcats took 26 of their 52 shots at the cylinder. I could go on – and on, and on – but if a picture’s worth 1000 words, then an Instagram video is worth $1B:

And I’m not really sure of the value of a GIF. But here’s one anyway:

By the way, full credit to UCLA.