Take this journey with me because that’s what it became. I’d set out to discuss UCLA versus Cal and their contrasting abilities to steal the ball and to not let the ball be stolen, respectively. But then a Wonderland twist of fate had me follow John Wooden down the rabbit hole and I wound up with an opinion on Westwood’s coaching situation. Like I said, buckle up cause it’s a long strange journey and that’s not even a Walton reference.

The UCLA Bruins aren’t soon going to be confused for a great defensive team – they’re good so don’t get me wrong – but not great. They yield 97 points per 100 possessions which is 50th in the nation. That’s good but like I said, it’ ain’t great. They rate as just the sixth best defense in the conference (the same conference that rates Oregon’s defense).

But what you might be able to say about their defense is that it is opportunistic. Like any intelligent entitiy, they recognize what they do well and they exploit it. It’s why Katniss Everdeen grabs the bow and Jordan Belfort grabs the blow. What UCLA does so well is get into transition. They take 29.7% of their offense in that go-mode (12th in the nation) and having watched them play, they make a very concerted effort to get into this facet of their game.

Before going into the offense – because I already defined this a defensive article and the Bruins are really effing good at the offense – I want to establish the components of UCLA’s defense and how it opportunistically feeds their offensive beast. We could break this down by a good, bad and ugly with the caveat that it’s really more like the good, less good, and meh:

The Ugly/Meh: Kyle Anderson’s goatee. Too far? Sorry. UCLA doesn’t protect the rim. They allow opponents to shoot 61.8% (260th nationally) and take more than a third of their shots there. That’ll add up. 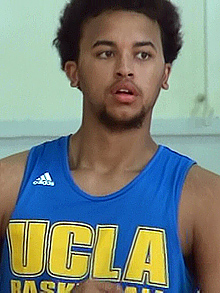 The Bad/Less Good: Teams manage to shoot pretty well against the Bruins. They “limit” teams to an average eFG% which is a combination of the aforementioned rim protection and a very high percentage of three pointers taken against them. Make more threes, increase your eFG%. This is essentially a matter of math but it’s an average output by the Bruins regardless. Regarding the threes, teams have been allowed to jack up 6th highest percentage of threes in the nation and they make a little bit below the average 3FG%(33.8% ranks 153).

The Good/Good: Steals! UCLA has the third highest steal percentage in the nation and has taken away 192 basketballs (interestingly that’s second most in the nation to Shaka Smart’s VCU team whom many UCLA fans thought should be the head man in Westwood because of the defense he coaches – just an interesting note). Furthermore, while the ‘less good’ section informed us that teams are making shots against the Bruins, when teams do miss, the Bruins do a pretty good job of jumping on the defensive glass. Go Joe Bruin was quick to note it isn’t necessarily a Bruin strength but they do manage to clean up alright: teams garner just 27.3% of their own misses against the powder blue (26th best in the nation).

Feeling settled on the defense? I feel like I understand it better and recognize that – again – it’s not great but it more than gets the job done. But what is the job? Traditionally a defense is built to limit the opponent. But if defense isn’t necessarily the Bruins’ strong suit, if they play more zone than a Steve Alford team is accustomed to, then the ‘job’ of the defense isn’t necessarily to stop the opponent but to accentuate the Bruins’ strengths. That’s arguably why they play more zone than man. They’re just better suited to it.

Here is a breakdown of how UCLA uses it’s defense to feed their offense: 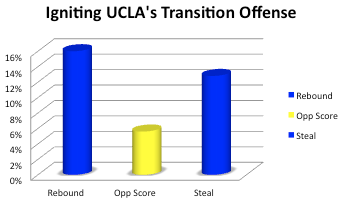 It’s pretty clear to me that UCLA would get a higher percentage of their transition shots off a rebound as teams are likely missing more shots than UCLA is stealing basketballs. The chart confirms that they use all those steals to ignite their fast break (12.8% of which I wish I had a national ranking). But we still don’t really have much context. Allow me another sweet graph, this time comparing the transition ignition breakdown including the next best Pac-12 transitions teams, Oregon and Colorado: 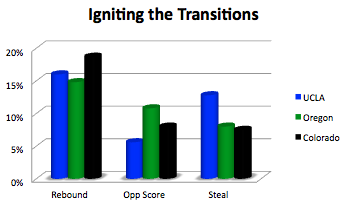 UCLA blows these guys out of the water in our third column (steals) while Colorado leads the break out of rebounds and Oregon out of opponent scores. The Buffaloes are great defensive rebounders. The Ducks are great opponent-letter-scorers.

But more on Steve’s team. UCLA’s offense ranks 22nd in the country by ORtg and 10th in eG%. It is their greatest strength and it is fed – as stated – by their transition offense which is fed by the aforementioned defense. The equation of it all looks a lot like this:

Very simple, yes, and probably flawed, but this where it all gets fascinating. Steve Alford, in the Ken Pom era (since 2003) has never coached a top-100 steal percentage team. Additionally, the last two teams he coached at New Mexico didn’t come remotely close to the top of any transition offense list (ranking greater than 200th in % of offense in transition in both 2012 and 2011). Furthermore, this team’s defensive efficiency is the fifth worst amongst Alford coached teams since 2003 and the hands down best offense in that span.

What I think just happened is that I explained to us that Steve Alford is doing one helluva job. This team – a team he inherited and didn’t build but with his own son – is doing things no team of his has ever done. He recognized where and how this team could be its best and made sure to accentuate what he felt they could be best at.

I opened this piece by telling you that the defense was opportunistic. We moved our way along to discover that they used steals and defensive boards to ensure they could do what they do best. Then the journey took us down the path of discovery that Steve Alford has made adjustments, been anything but bullheaded, as the leader of the most storied basketball program in the history of the sport.

In light of such, I’m tempted to follow another tease down the judging coaches rabbit hole. But that would put us in some sort of a Catch-22/hypocrite scenario in which I’d diatribe about not judging a coach with 900 words sitting above that diatribe about what a great coach the coach we shouldn’t judge is. I’ll refrain.

Besides, Alford and his transition show just dropped a game at Utah and has one tough assignment ahead of them with Stanford and Cal coming tonight and Sunday, respectively.

And with that, I’ll transition out. The journey endures.

6 thoughts on “UCLA’s Transition Offense from Defense and More. Much More.”