If I had a dollar for every time this week that I heard “I pick my bracket based on how the mascots would fight each other” then I would’ve hosted my own $8 bracket challenge. I CREATED THAT PREMISE FOR YOU RIGHT HERE! Granted, I would probably be beating them in any bracket challenge as it were. I’m winning.

And so too are Ralphie and Butch.

Which is a fascinating championship. Here we have what seemingly amounts to the quintessential anthropomorph – an adorable and hugable Cougar who gloriously plays up that lovable side to the extent that he has ‘hey girl‘ photos and a grossly formal Wikipedia page. Meanwhile, Ralphie is celebrated for her definitive realism, a literal charging buffalo onto the field of battle. For all of Butch’s sweetness, Ralphie matches it in raw American. 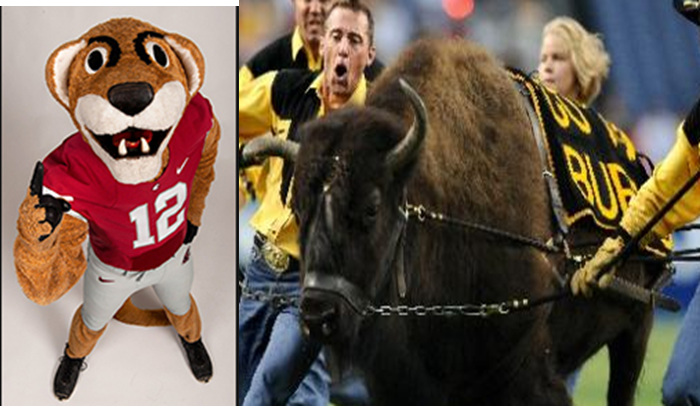 Round 1 (255 votes):
Chip from Ben Burrow of Rumblin Buff: I guess, ostensibly, I’m supposed to be talking about Chip, our Mickey Mouse with horns made available for the kiddies.  However, if you’re going to talk University of Colorado athletics, there is only one mascot that matters – the ton of rampaging bison known as Ralphie.  Often a source of confusion, let me confirm that Ralphie is, in fact, a female.  It’s an important distinction, because, if we were to let a male bison loose, death would ensue; after all, a buffalo is an unstoppable goring machine when pissed off.  With the lady involved, we’re only talking serious bodily harm, if you’re lucky.  So, come at me with your anthropomorphic plush toys.  I got a frickin’ buffalo, and you don’t.
Round 2 (199 votes):
Ralphie (not Chip) from Ben Burrow of Rumblin Buff
Well, I guess Ralphie thundered past poor old Traveler.  My condolences to the family of the deceased, but the glue factory’s quota must be met!  Now onto Oskie, which, as far as I can tell, is some kind of pervert bear.  Now, I don’t know about you, but if given the choice between the noble symbol of the American West and furry bait for Chris Hansen, I’m taking the buffalo.  Free choice, and all, but I think we all know the right choice here.
Semifinals (620 votes)
Ralphie from Ben Burrows of Rumblin’ Buff
Thankfully, someone called the cops on Oski, and he’s off to enjoy the the fruits of our judicial system, saving us all another uncomfortable second under his perverted gaze.  Ralphie, as she is wont to do, just keeps thundering forward, onto the semifinals and a date with Wilbur the Wildcat. The first thing I see when I look at Wilbur is his stupid hat. (Seriously, a hat?)  What does that signify to me?  Domestication. This Wildcat is ‘wild’ no longer.  He has given up his natural advantages for the comfort of human society.  What a loser.  Ralphie, on the other hand, remains a buffalo, yearning to stampede and conquer the plains.  Her handlers?  A mere annoyance; she only tolerates their presence out of pity.  Given enough reason, she’s off to the races, God knows where to.  Meanwhile, there’s Wilbur, on the couch with his hat, watching the television.  Domestic and boring.  What. A. Loser.  Give me the buffalo and freedom.
Round 1 (119 votes):
Butch from Michael Preston of Coug Center: He looked more badass before his costume change (made in the name of safety) but Butch T. Cougar is still all that embodies WSU. The dude rides an ATV at full blast onto the field before a football game for cripes sake. He has been known to photo bomb even the most carefully planned sorority pose picture and he isn’t shy about acting his age…which we don’t know but we assume he’s in his rambunctious teenage years. More important than any of that is how much he’s beloved by every single WSU fan from ages 3 to 103. He’s one of the best known mascot in the country for a reason: everyone, even visiting fans, want a picture with the gregarious fella with the long tail. Do you see any other Pac-12 mascot pop up on your Facebook feed as often as him? I didn’t think so.
Round 2 (445 votes):
Butch from Michael Preston of Coug Center: Butch T. Cougar has advanced to the second round past some shrubbery which is somehow the mascot for a school who takes their nickname from a color. He faces off now against a solar being from the underworld of some kind and all I know about those creatures is that they go to the South looking for spirits to extract from country singers. Butch embodies everything about a mascot you should love. He’s beloved my children and their grandparents who all want a picture with what is arguably the most recognizable mascot west of the Mississippi. He combines the perfect about of ferocity and loveable-ness. He shows up in more pictures with alumni than any other mascot in the conference and there’s a reason for it: WSU is extremely proud of their mascot. Bonus info: the T. in Butch T. Cougar stands for…anyone, anyone?…”The”. So…there’s that too!
Semifinals (520 votes)
Butch from Yours Truly
Look at me. It’s been noted that I rub elbows with Gosling and could wear a suit like Clooney. But instead I run with Pirates. Like that brand of being that does as they wish and leaves no survivors. Have you ever seen Pirates of the Caribbean? Only Brad Pitt (Troy) and Johnny Depp have flipped the script from damsel trying to kill him to…well you know where this is going. Look, the “T” is an abbreviated definite article (the). Butch abbreviates the simplest of words because he doesn’t need you worrying your pretty little heads with too much.  When Butch wears ‘sex panther’ it works 100% of the time. He is, Butch T. Cougar.