You know the great fallacy of men is that we don’t like drama. We’ve bro’d out over so many fresh coldies citing how much we hate and don’t need drama as the conversation turns to how excited your are to watch this month. The mystique is in the unknown, the drama. The unexpected becoming reality, narrative unfolding and collapsing before us. We don’t like drama. We crave it. Just don’t date it.

Here’s the evening’s preview of drama.

#7 Oregon vs. #2 UCLA, Yes Please O’Clock at Get to a TV Standard Time
The Scoring Game

Before Oregon started this little eight gamer, we allowed ourselves some optimism because they had arguably the toughest stretch of their schedule upcoming: @UCLA, ASU, AZ. And then news broke that Kyle Anderson and Jordan Adams did something likely sophomoric (another intended pun) and would not participate in that game. This. Because when you start 13-0 and then go 2-8 we start to care less about how you’re winning and more about whether or not you ever will again. The Ducks are and I can’t agree more with this Ernie Kent quote:

The scariest thing is that they’ve got their swag back.

I wouldn’t even call it scary. I’d call it Errol Childress. This is a group of transfers – a team that spent the middle portion of their season playing uninspired, lackadaisical basketball – who came to Eugene to Just Do It. And now they have their swag back!? We criticize the system of aggregating these castoffs and are quick to highlight its faults as this team faltered. But now they have their swag back. Because for all of the chemistry flaws we could cite that caused their near collapse, we can redefine those – certainly now – as strengths. Their strengths are their weaknesses. SWAG. 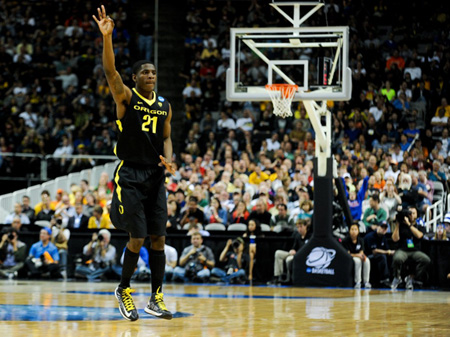 Of course while we’re on this narrative kick, did you see the ass kicking UCLA just endured? I haven’t really discussed it much but note that teams were putting up 1.16 points per possession against the Cougs in the thirteen games since they’d last held a team below 1.00ppp. So naturally WSU would hold the conference’s best offense (1.15ppp) to 0.82ppp. Only Mississippi Valley State and San Francisco State fared worse against the Cougs. All of which is to say that game was literally an aberration. You couldn’t run that through a simulator a gajillion times and never get an event remotely close to that. Which is to say UCLA would seem to be pissed and far from defined by that game/outcome. Furthermore, UCLA has lost 3 of 4 to the Ducks and probably thinks they should have won the Wear family miracle so that both David and Travis could stake claim to last second heroics in defeating Oregon. Alas, stories aside, this is a great match up.

Our first stop down match up lane is with Oregon’s offense. I’ve called them a mid-major with a budget and I’m going to stick to that. Yes it’s important for them to get defensive stops but it’s not their strength (SWAG). The three point shot is important to them. During this eight game win streak, they’ve maintained 33% of their offense from distance (their season average) but are shooting a blistering 46% from deep. Aside from these eight games, the Ducks shot a great 37%. But 46% as a team? Compare that to their losses where we find the Ducks taking 56% of their shots from deep and connecting on just 33% of those shots. Fair to say the Ducks live by the three and die by it? Now consider the fact that UCLA allows teams to shoot 41% of their offense from deep and begin to make your game considerations. Of course if Oregon is going to try and outscore you, UCLA is the team that can counter by outscoring them. They lead the conference in offense and they do that by getting into transition. They get into transition by stealing basketballs (Jordan Adams is the school’s all-time single season steals leader). UCLA is sixth in the nation in creating fast break offense from a turnover. Meanwhile, Oregon ranks fourth in the conference and 41st nationally in TO%. It means they take care of the ball pretty well and limit opponents to the 12th lowest percentage of transition offense from a steal, 4.1% (IT’S MARCH AND I’M DEEP DEEP DEEP DOWN THE RABBIT HOLE). In some regards, it would seem Oregon has the transition antidote, but collectively, the Ducks are an average (128th) team in limiting transition attempts. In summary:

#3 ASU vs. #6 Stanford, Do you actually think this game will tip remotely close to its scheduled tip after three games, three intermissions, and a clearing of the venue? PST
The What’s Stanford Going to Do Game

If you were watching the Stanford-WSU game then you definitely don’t live on the East coast (I see you, CE). But you also heard Don MacLean exhaust the Stanford-must-win narrative. Now, to be fair, it was his fourth game of the day – a marathon. I imagine he did well at XS last night but that’s probably a tale we won’t soon hear. On that note, how much do you think KO is hating being relegated to the SF studio show when – you know – Vegas? Digression. Stanford needed to win that game – obvs – and they did. Post-game, Dwight Powell dropped the rare truth-and-reality bomb when he noted that he had never been to the NCAA tournament. Now I already mentioned that MacLean exhausted it and I already mentioned that I didn’t want to exhaust it when discussing Cal. But in Stanford’s case, this may be nonexhaustive. They’re the class that stayed – nary a one transferring or leaving early, a rarity these days. And they’ve never been to the NCAA tournament. So where are they today? Who cares. The Card need a few less f**ks given and some more of the Ernie-sais-quais: SWAG. Matt said it great on WANE yesterday, “…they don’t do anything easy. Stanford does things the hard way.” Which I thought was the easiest way (see what I did there?) to describe the Cardinal. In diving further into it, I got to thinking about how we make things easier for ourselves. Usually, when I want to make something easier, I’ll ask a friend. I’ll seek help. I’ll look for an assist! AHA! So I looked at Stanford’s assist rate and – low and behold – it’s the lowest in the conference. They have two First-Team All-Conference performers (Powell and Randle), an All-Defensive stud (Huestis), and the most improved player (Anthony Brown) in the conference. It’s a team littered with talent working in silos. Which would explain how/why Stanford has no bad losses (aka teams less talented than them) and really only a handful of quality wins (@ UConn, UCLA, Oregon). They’re 4-8 against the RPI top-50.

But maybe that’s enough about the Cardinal. Because they’re playing Maroon and a few contemporaries of mine like ASU to make a run into the championship game. They’ve got the right pieces – play making point guard, shooting off-guard, game changing big – and the venue is neutral which means it’s not a road game. The Herbivores were just 2-7 on the road this season. And there’s further data to suggest that the MGM serves as Jahii’s friendly confines. In last year’s Pac-12 tournament, Carson averaged 29 points on 61% shooting. He mixed in 11 assists and 9 boards while he was at it. So is it worth noting that Carson averaged 25ppg on 61% shooting against Stanford this season? Probably not (sarcasm font). But what we should note is that the Cardinal are pretty big up front. The third component of ASU’s projected success – game changing big in the form of a Bachynski – was a moderate factor in losing to Stanford (36 minutes, 7 points, 10 boards, 2 blocks) and a non-factor in beating them (15 minutes, 2 points, 3 boards, 0 blocks, 4 fouls). Is he a factor in this game? Hard to say. Stefan Nastic isn’t afraid to bump and Jordan isn’t afraid to flop. For all their size, however, the Cardinal make little effort to get to the rim. They rank 304th nationally in percentage of shots at the rim, begging the question – if we haven’t asked it already – is Bachynski a factor in this game? I mean, having an NBA prospect man the paint never really hurt anyone but it would seem that this will be the Jahii show. And he’s not afraid of that.