For me, Media Day is about the experience. Larry Scott noted as much in his opening remarks, that it’s an opportunity for the student-athletes to do something they don’t necessarily always get to do. For Brandon Ashley, it was the chance to come home and answer to his mom. She asked the last question of the Power Forward, confirming that he was taking his vitamins and that he was ready for the season. You should’ve seen how Brandon beamed, smiled, and got embarrassed all at the same time. I call it 2015’s first shining moment.

For me the experience was about the nuance. Reading between the lines and trying  to figure the whole thing out. I won’t soon claim to be a journalist but I want to know the stories. So I ask Steve Alford if he’s going to keep playing fast. He never did before, is he going to continue to do so now?

And Coach Romar, your defense was the worst it’s ever been last year, how are you emphasizing, if not improving, that now?

You, Coach Miller, tell me about the significance of having a two-year starter at the point for the first time in your Arizona tenure?

Coach Tinkle, what does your brother-in-law do? (actual question I asked)

There was a lot to take away from the event if you were paying attention. I tried my best. I probably missed a lot. There’s a lot in the previously linked Rush the Court article. Here, however, with an interest in brevity, are my approximately-tweet-length takeaways from each of the twelve teams, Bobby Dibler (head of officiating) and Larry Scott.

In order of appearance:

On Bobby Dibler (head of officiating): Far less from him this year. No Cancun or rules changes. But the NCAA is going to experiment next season with a few new rules, most notably the “merging” of any team timeout with the media timeout if the team TO is called within 30-seconds of the scheduled media TO.

On Larry Scott: The man really wants the Pac-12 in China. He glowed about the All-Star team and announced the first ever game to be played, that counts, in China. Washington and Texas will compete in the far East in November 2015. Also, he’s serious about staying ahead of the curve on the NCAA’s autonomy ruling (in case you missed this).

On USC: Not there yet and Andy knows it. He was efficient with his words and very high on Jordan McLaughlin – the motor of Dunk City.

On Washington State: What a charmer that Ernie Kent! He’s been going door-to-door pretending to be lost in Pullman as reason to rejuvenate the fan base. He called his time away a sabbatical which has rejuvenated himself.

On Oregon State: I appreciated Tinkle’s candid response regarding the bare cupboard he was left. He said it makes things easier to bring in the guys he needs and wants for his style, his program. Wouldn’t publicly say what his brother-in-law does.

On Washington: Tough group to figure out. Collectively they seem very excited about Jernard Jarreau’s return. They’re getting after defense early and need to find their identity on that end of the floor. Last year they lost it.

On Utah: They’re going to be pretty good and they know it. Larry set himself up for this and took advantage of “ESPN opportunities.” Jordan Loveridge is definitely moving to the wing (don’t necessarily agree and in side conversations there are others who are on-board with me) and Delon, based off of JL’s performance in scrimmages, is buying it.

On Cal: Cuonzo Martin might have moved solidly into my second-favorite-coach-in-the-conference slot. I just loved how he talked about basketball and building players into the mold he needs and wants them to be in. Playing and living outside their comfort zones.

On Arizona State: Herb Sendek is tremendously enthusiastic. I really like that and I have no idea if I can believe him that his influx of transfers and Tra Holder combined with their few returners can be competitive and uptempo again (he said they will). But I appreciate how he told me they would.

The background music was dubstep.

On Stanford: And now they know they can. I’m really, really curious how this program responds to their first tournament appearance under Dawkins. He called it a new “standard.” Said the “bar was set.” Love that.

On Oregon: The elephant in the room was inescapable. The question was asked and Dana answered but it seemed to weigh on everything. From coaching a thin roster to the expectations of such an inexperienced team. It will loom.

On UCLA: Like I said, this is now Steve’s team and I think he confirmed as much. He told me he’ll continue to push that pace and noted what felt like half his roster and how they each wanted to play fast. 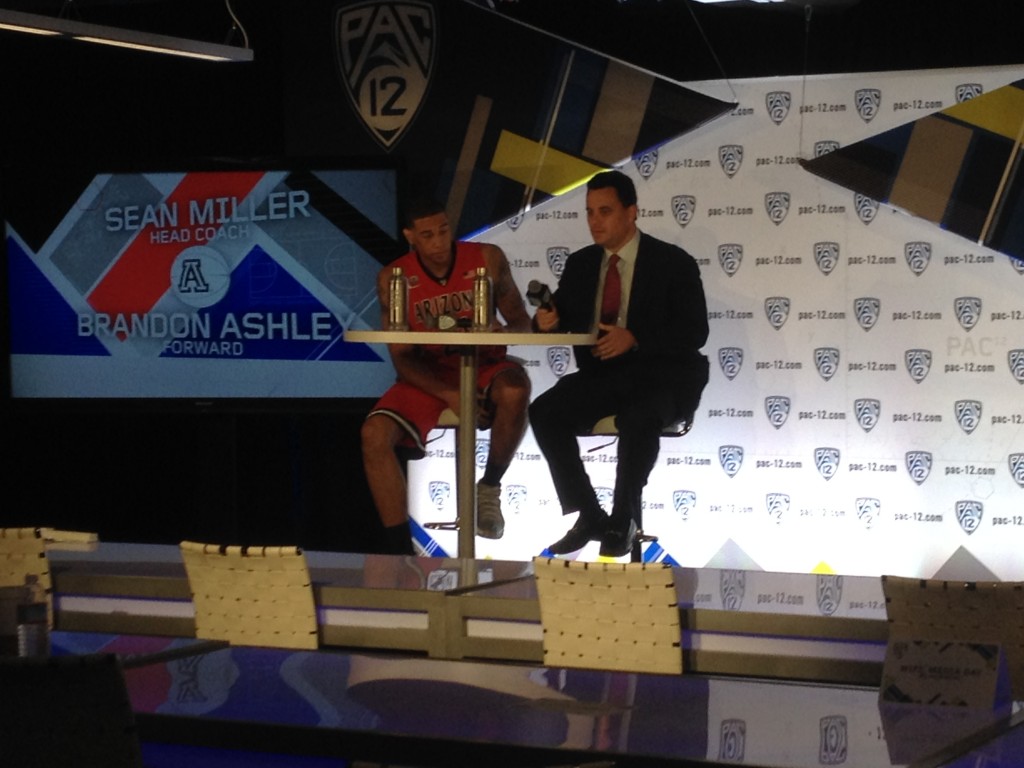