There is always a moment. It’s a look or a touch or a feel or something that only you can understand. When defining the things that are most important to us, we prescribe them to a single moment. One. You could say that it shines and that would befit the lead of a basketball article dropping on season’s eve. But there is always a moment. We need to remember that.

One glance, perhaps a word said, insignificant to her but it meant the world to him. It maybe went unnoticed by a thousand people, but there was something – nuance – that resonated and it was yours. A moment uniquely your own, clarity amongst the masses.

No matter how your life is led it’s moving faster than you care to admit. We miss things. I’m not lauding you to slow down. Maybe you should? I can’t make that call. But there are moments and when they can be captured, no matter their brevity, hold on. It needn’t be explainable or rational. Hold on to it.

These are your stories.

Sometimes it feels silly. Childish to focus on a collegiate sport for which I have no bearing on the outcome. It’s silly to be so invested in something that doesn’t affect my life. No matter how hard I clap or which seat I’m in –  not even the shirt I wear – nothing I do will determine a winner or loser. The game’s outcome will be determined by others who have practiced and prepared, who play. I’ve read? Researched? I’ll never be a member of Club Trillion.

We are fans. I am a fan. Sometimes it feels silly to have my emotions drawn because of a game played by teenagers I’ll never meet. Some of whom I followed since they were 16. I’m 30. It feels silly.

And sometimes it feels silly to know that Kyle Anderson distributes the ball well. That his passes yielded a certain number of shots at the rim. It’s perhaps silly to extrapolate that and discover how many possessions of Kyle’s turn into a score at the rim. I did that.

To overnight to Los Angeles or disappear from work or StubHub or Tweet or phone stream or take three hour lunches or brackets or blogs or alienate during a coaching hunt or viscerally react to maroon or bravado. It feels silly.

And in reality it is. Ask me why I do it and my cheeks will shade blush. I’ll grow embarrassed at my trivial choice in pastimes, chuckle, and concede that maybe I have to grow up. Confidence isn’t always a strong suit. I question my decisions. I don’t make them. I question but I come back. What am I doing? What are we doing? Why?

Sometimes it feels silly to feel. We’re supposed to feel.

I sat in the semi-far reaches of Anaheim’s Honda Center. The tickets were gifted to brother and me from dear friends who’d perhaps put their eggs in the Dallas basket. We benefited from their perceived foresight. Ultimately their oversight. Arizona lost to Wisconsin. They never went to Dallas’ Final Four. In that weekend Nick Johnson scored a flurry of points to bury the Aztecs and Aaron Gordon heroically grabbed all of the rebounds. Frank Kaminsky put on a performance they’re still talking about. The Wildcats never got the final shot off.

I remember that trip in 1998 as time with my dad and brother. When I tell you that Rick Majerus masterfully out-coached Lute Olson that afternoon, it’s because I read about it somewhere else. Others, perhaps not there with their dad and their brother, took great notice. Their own study of Kyle Anderson.

Sixteen years later the brothers found themselves in a familiar seat. They couldn’t sit. Their team wasn’t winning and the game demanded their noise. Everyone’s noise. In those semi-far reaches, with the game unfolding in a manner the brothers disapproved of, their seats were barely touched. The Wildcats were losing. At the first media timeout of the second half, one turned to the other:

I mean…it would make sense that we switch seats right now.

They exchanged seats. The Wildcats outscored the Aztecs from that point forward. Arizona won. In the semi-far reaches of the Honda Center we were mother-fucking sorcerers. We do not control the outcomes. I’ve been switching seats with him for 28 years and it’s failed us before but on that night it worked. The game is a blur. I know my team won and I know Nick Johnson scored that flurry of points. There was a critical steal. The game is a blur. Details were captured through literature and worldwide networks.

We switched seats. I’ll never forget it. A moment as silly as intimately following collegians for five-months just to wind up in a seat next to your brother in an arena built for a team based on a Disney film. Silly mother-fucking sorcerers. 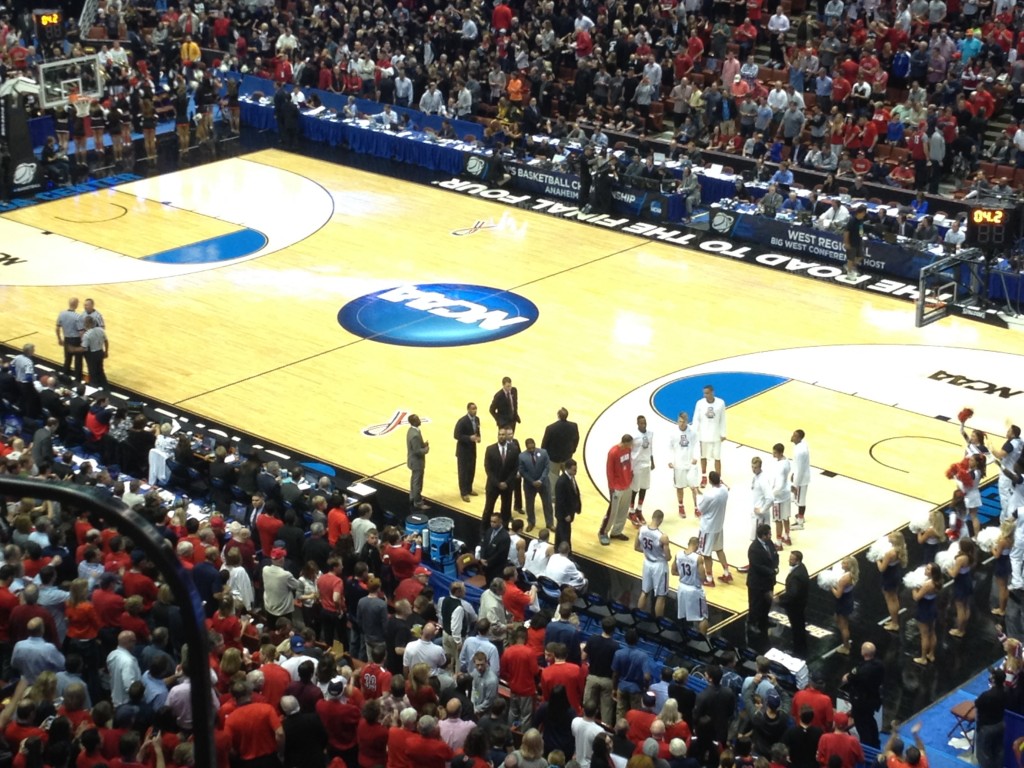 Sigmund Freud suggested that a crowd allows an individual to tap into their simplest emotional state, to act almost primitively. As more complex emotions are reserved for higher states, the crowd allows the individual to operate at their lowest common denominator. Collectively it is called a “primal horde.”

Further theories suggest that crowds are derived from a complete deindividualization. One loses their sense of responsibility or control through the anonymity, unity, and arousal afforded by the group. Such lessening tempts members into the perhaps irrational activity of the mass. Attention is paid to the group, not the individual, further desensitizing an already susceptible individual to act outside of social norms.

Gustave Le Bon, a French sociologist, postulated that a crowd emerges after an initial stage of what he called submergence. This occurs when an individual loses their sense of responsibility, their conscious gone, lending themselves to the subsequent stages of crowd development: contagion and suggestion. It’s the first phase, however, that other theorists have centered upon, the common thread across crowd psychology: losing one’s self. This loss perhaps diminishes the individual but, as a crowd member, it simultaneously elevates the individual as a powerful part of a growing whole. As I read it, “an invincible power.” The Le Bonian stages of crowd suggest aggression. Research has shown that a crowd does not specifically rise for evil.

A crowd is necessary. 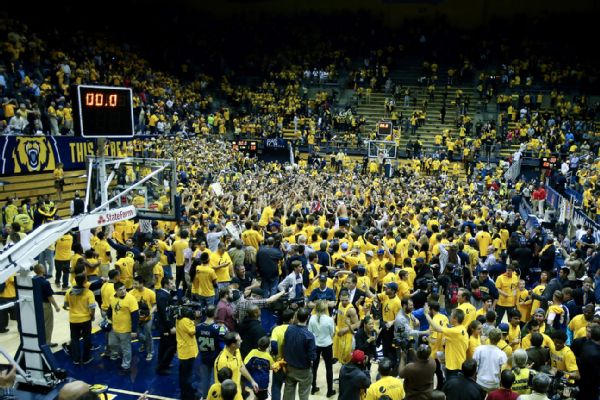 We run at each other to meet in the middle.

Self-categorization and social identity, theories developed by John Turner, demonstrate a multitude of levels by which an individual associates. From the most basic – “I” – building to the highest level of abstraction – “humans” – identifying within a given category is important to the individual. They can be, for example, a Christian, a Democrat, a Bruin, a Beaver, a Duck. This is important to the individual. Joining a crowd is natural.

Being a fan categorizes you. It subscribes you to a group. You self-categorize, joining and deinvidualizing to become a part of something bigger than yourself. A loss of ego in which we’re moved by something we can’t necessarily control. Remember, we don’t control the outcomes.

There’s a phrase for this, a sports encounter, which is unique to this categorization. The communication between fans contains a perceived knowledge of sport, an understanding of the intricacies of the chosen self-categorization. Researchers have made note that sports fans more openly share their emotions at perhaps unprecedented levels. A 1989 study recognizes that sports are one of the few forums within which men openly share their emotions with other men.

We congregate to watch games. Crowds sourced within this categorization, allowing individuals to dissociate from themselves, become a part of collective thinking and cheer, in this instance. Crowd psychology proposes that this allows us to act irrationally, differently than we might when we’re uniquely ourselves.

The ball is tipped and the individual is lost.

That night, greater than 17,000 people inside the Honda Center didn’t know we switched seats. Most notably not one person actually playing basketball. Further, the reality of the matter is no one knew where we were sitting. We did. It mattered to us.

Moments aren’t tangible. I can’t tell you when or how to recognize them. They’re unique and only available when we allow ourselves to be a part of them. It’s always happening. Pay attention. Because the scoreboard isn’t always going to read the way we want it to. No matter how hard we try. No matter which seat we’re sitting in. It can read wrong.

We don’t always win. Life rolls on, leaving us to determine our reactions to whatever the scoreboard says. Sometimes we lose. Things fall outside of our control. We do our best. We have to keep the moments; those perfect, personal instances amidst our loss of self in a crowded experience. Pay attention. Silly as it may be.

So dive in with me. I don’t know what the water’s like but that’s probably the point. We don’t control the outcomes. The nice part is knowing we aren’t going it alone. It’s why you jump. You’re going to have someone to switch seats with. 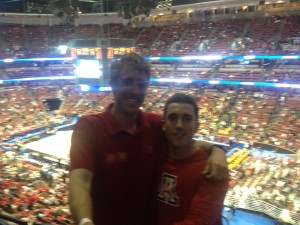 3 thoughts on “What Are We Watching For?”