My questions. His answers.

Will you be making the trek to Tucson for the basketball game and a presumed round of golf?

I will be making the trek to Tucson, but not sure I’ll have time for a round of golf because I’m getting in on Friday night.

Once again, the Wolverines are a tremendous offensive team. They’re shooting 40.8% from distance and clicking at a 110.8 offensive efficiency (13th in the nation). What are the components of this offense? What – if not who – makes it go?

Michigan just played its worst offensive game since 2010 (in terms of efficiency) in a home loss to Eastern Michigan, so I’m not quite ready to compare this offense to the last two offenses. However, there’s still a lot of talent. Caris LeVert can do just about everything with the ball in his hands, Zak Irvin is a great (but slumping) shooting and Derrick Walton is a very good point guard. LeVert is the key, but those big three have essentially carried Michigan this season.

Michigan still runs a lot of ball screens and is very dependent on jump shooting, but it just isn’t quite as good at either of those things as it was last year. 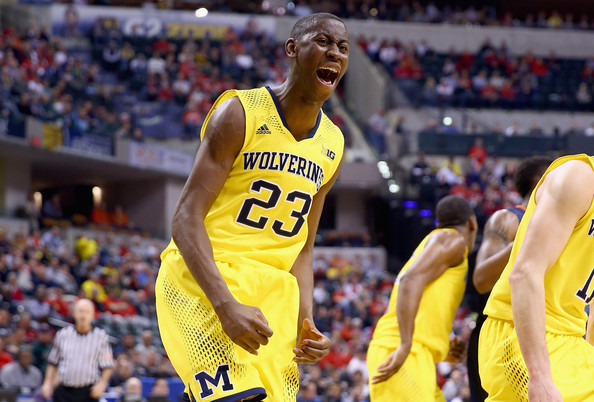 Arizona has the second biggest Wildcat front court in the nation (Kentucky joke). Tell us about the guys who are going to be tumbling in the trenches with Kaleb Tarczewski, Brandon Ashley, and the positionless power guards, Stanley Johnson and Rondae Hollis-Jefferson.

Arizona’s massive front court will be met head on by Michigan’s … undersized and inexperienced frontcourt.

Redshirt freshman Mark Donnal starts at the five position and he’s backed up by true freshman Ricky Doyle, who has been Michigan’s most impressive big man, and 6-foot-7 senior Max Bielfeldt, who can occasionally knock down a three.

If I were a 6’6” seventeen-year-old and rated a two-star recruit, could John Beilein develop me into an All-American and a lottery pick, too? (Nik Stauskas, Caris LeVert, Glenn Robinson III, Zak Irvin?)

You make a fair point, but Michigan actually struck out on quite a few guys just like that in the class of 2015 as Luke Kennard picked Duke, Devin Booker picked Kentucky and James Blackmon Jr. picked Indiana. I’m confident that Beilein will make do, but the Wolverines have been struck pretty heavy by early entry and are still searching for some reinforcements sooner than later.

Speaking of which, who is next? If my eyes are focused on the usual suspects (LeVert, Walton, Irvin) who’s the name Wildcat fans need to know before they’re shouting, “Who the hell is that guy??” at their televisions?

That’s the question we are all trying to figure out. LeVert, Walton and Irvin are great, but this team really lacks depth from there. Spike Albrecht is a great passer and a streaky shooter, one of the best backup point guards in the country, but he’s playing starters’ minutes for this team.

Ricky Doyle seems like the most likely candidate if only because he’s had some big games early on. Doyle strong and has shown well on the offensive glass, but he’ll likely be outmatched by Arizona’s frontline in Tucson.

Elephant in the room – Appalachian State New Jersey Institute of Technology and Eastern Michigan. At home. What happened there?

Against NJIT, Michigan played a terrible offensive game and allowed the Highlanders to shoot 65% from three-point range. Against Eastern Michigan, the Wolverines only managed to score 42 points per game and were completely stifled by Eastern Michigan’s length in the 2-3 zone.

Who do you want to be the next football coach at Michigan?

Jim Harbaugh’s the obvious choice if he wants to come, but if not him then I don’t know enough about the football coaching landscape to make a better prediction.

I’ll be watching this game with enough Michigan fans that I won’t want to mention that my family is from Columbus. What do I need to know about this Michigan team to sound like the most knowledgeable guy in the room?

If you want to fit in with Michigan fans this month, just start discussing Jim Harbaugh ad nauseam.

I asked you of this last year about Mitch McGary who was a pre-season All-American. This year, some people have put Caris LeVert on such lists. Is this warranted? Is Caris LeVert capable of being one of the fifteen best players in the country?

LeVert’s definitely capable and he’s already had some flashes this season, but right now he hasn’t been quite as dominant as Nik Stauskas was last year. For LeVert, the biggest problem early on this season has been his ability to finish in the mid-range as he lacks some of the size and strength required to get all the way to the rim. That being said, I’d be surprised if he’s not next up in a growing list of first round draft picks for Michigan in June.

How do you see this one shaking out?

Arizona matches up really well with Michigan. The Wildcats have the length, strength and quickness to slow down LeVert and Irvin on the wings defensively and they’ll likely have little problem scoring inside against Michigan’s young bigs – as did Syracuse’s Rakeem Christmas and Villanova’s Daniel Ochefu.

Playing its first road game of the year, it’s hard to imagine Michigan turning everything around in Tucson, but sometimes a change of scenery is all it takes. I’ll go with Arizona by 11.