A couple weeks ago, as I was contemplating a content calendar, the idea of Luck came up. I’ve previously written about Utah’s luck but decided not to address it. I figured the stat wasn’t worth diving in to as it ultimately supplements the narrative – nice – wasn’t necessarily going to help us understand this year’s team.

Up 7 with less than ninety seconds remaining, Utah’s luck seemed to be letting them down again. Perhaps I should rephrase: Utah was peeing down their leg as Wichita State was handling business as usual. “We don’t lose these games,” said the Shocker body language. “We do!” said the Utes’.

But then a funny thing happened. Dakari Tucker went right at the rim, drew contact, and made free throws. Tie game. Brandon Taylor fouled Van Vleet with one to give, disrupting whatever play momentum the Shockers might’ve built. Overtime. The ref got knocked out (hope he’s ok because he got popped).

Extra basketball was whatever boxing cliche you want to use. These guys were beat, a lot of front iron and slop. There are no legs at altitude at 11:30pm local, 12:30am Wichita. With just 28 ticks remaining, Ron Baker (who else?) drove, switched hands, and gave Wichita State the lead on his first basket in ten minutes. 68-67. 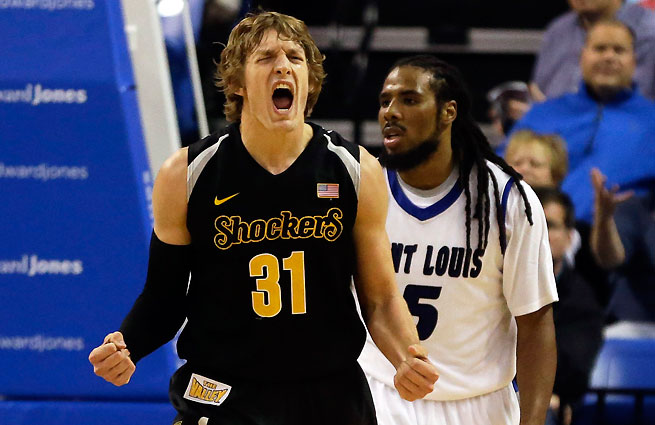 Luck, it would seem, was once again not in the Utes’ favor.

But let’s review what Luck means, statistically speaking. Predictive analytics, such websites as KenPom, develop predictions on what a game’s outcome will be based on a team’s tendencies. For example, last night’s game was expected to be a 63-62 Wichita State win. When a team deviates – one way or another – from their expected result, and by varying margins, we can begin to learn something. The coupling of these deviations with actual results – their predicted record and their actual record – determines a team’s luck.

Especially interesting is when a team is exceptionally unlucky. A season ago, Utah was 21-12 with eight losses by four-or-fewer points. Think about that. I posted in today’s #34b an article about close calls. It sucks. Utah was the 299th luckiest team in 2014. Otherwise known as unlucky. It was like every night, as the Utes took the Huntsman floor, they did so running under a ladder. A black cat entered their locker room before every game. They held morning weights with an open umbrella inside the gym. They didn’t respond to Larry Scott’s chain letter. The Utes were 2014 unlucky which could mean – considering retained and added talent – that 2015 projected to be an improved. If luck would have it of course.

But things weren’t looking any better as another game seemed to be slipping away.

Which brings us back to Baker and 67-68 and nineteen seconds remaining. Utah called a timeout and out of that huddle, Delon Wright made space, a floater, and the Utes took the lead, 69-68. Changing luck? Not so fast, a blocking foul on Wright sent Van Vleet – an 80% career free throw shooter – to the line.

As luck would have it, Van Vleet missed.

But then, as luck would have it, Evan Wessel got the offensive rebound. Offensive rebounds off a missed free throw occur just 15% of the time. Wessel then missed the putback, a shot he makes at a 71% clip (fine, he’s just 5-7 on career putbacks but allow me narrative). With just six seconds remaining, Chris Reyes secured the ball, was fouled, and headed to the free throw line to win the game. He did not win the game.

But Jakob Poeltl was there. He secured the offensive rebound off the free throw (remember, just a 15% of doing so) and all but secured the game. He too would miss his charity tosses, but the Shocker heave proved long. 69-68.

As luck would have it, the Utah Utes won.