From inside the Haas Pavilion for Cal-Stanford, I observed things. This is what I went home thinking about after an entertaining 69-59 Cardinal win.

I laud you to finagle yourself into excellent basketball tickets. They are a dish best served free so always say ‘yes’ when offered tickets. It remains my life’s greatest regret that I adhered to a study schedule (yes, that was a component of college life for me) rather than accept the owner (owner, as in: Man who shelled out cash to make decisions) of the San Diego Padres’ tickets. Of note, I did not study and watched the entire game on television. I digress. When you’re up close for a basketball game you get to see exactly how seven feet fills up a lane. Suddenly, ‘points in the paint’ isn’t a statistic, it’s a goddamn Purple Heart. Length isn’t so much a draft component, it’s the tentacles of The Kraken.

Here’s what I’m drawing up for Haas’ next renovation. I don’t have the sketches – and I won’t – but let’s get rid of that view obstructing ring that holds two Digital Revolution-era screens with a sounds system befit your grandmother’s car. Let’s modernize the house of jeans! Slap a midcourt, overhanging scoreboard with advanced characteristics like ‘high-definition’ so we can really maximize those canyon walls.

3) The thing about great defenses…

Maybe Cal just doesn’t have one? I mean, you see these guys working , it’s what their coach demands of them. But at the same time, you see Jabari Bird still hobbling on a recovering foot; David Kravish perhaps just not up to the physical grind; the athletic limitations of Sam Singer; you’re not going to overcome defensive lapses when your primary offensive culprit (Ty Wallace) shoots 6-22; and then, of course, there’s the issue of…

4) Brown and Randle and hope for rain

Indubitably this is the best backcourt in the conference. I don’t know what you necessarily call TJ McConnell + (is it Rondae or Stanley), but when it comes to raw ability to carry a team, these guys have got it. And they do it. Last night it was a combined 43 when I’d asked for 54. There isn’t a bad shot for Brown and Randle can get whatever shot he wants on the court. As a pair of seniors (and especially if Nastic is grabbing 9 boards and contributing 15 points) they are enough to carry the Cardinal back into the Sweet Sixteen.

Is JD a second-half-no-jacket guy?

If a Stanford game goes to enough overtimes, Johnny Dawkins will end up with his dress shirt completely unbuttoned.

6) This Photo is Kinda Awkward 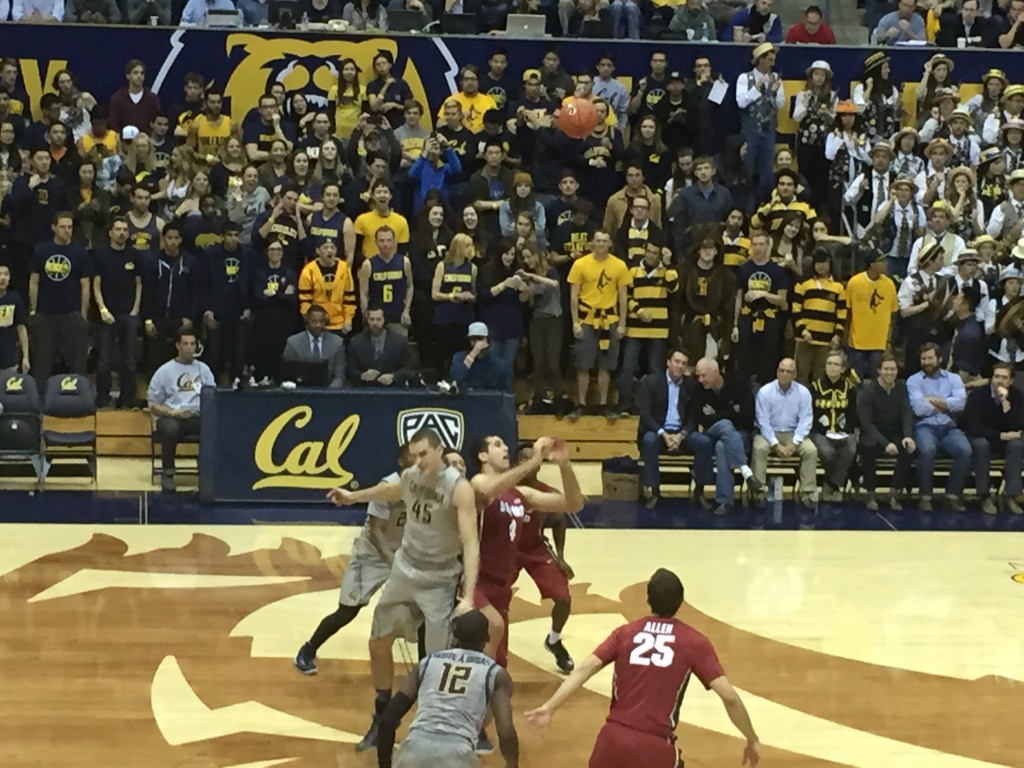 This is the second time I’ve gone to Cal-Stanford at Haas. The last time, the entire Stanford coaching staff was ejected. That’s awesome. The Cardinal have now won three straight in Berkeley and the band has been there for each of those wins. Now I’m not positive if band attendance to a rival institution is par for the course, but what I do know is Cal welcomes that weird and raucous group and promptly babies them into the corner as definitive persona non grata. The outter most reaches of Haas are generally unattended except for the Stanford band. For three straight years now, they’ve tooted and banged for the victors.

8) Who’s starting a “BRING BACK THE BEAR’S LAIR” campaign?

Berkeley is severely lacking in true sports bars. The Bear’s Lair, formerly smack in the middle of campus, was an institution. I’ve heard tales of pre-noon, $1 pitchers. There were TVs and cheap beer and it smelled of college and it was supposed to never go away. It went away. So who’s going to try and bring it back? I certainly don’t have the pull (though I am a UC degree holder. Which is actually worth the tangent of noting my degree is signed by The Governator)

5 thoughts on “Eight Observations From Inside Haas Pavilion”