We need something to look forward to. Conference play begins tonight and because while we stuffed ourselves with holiday cheer, the Pac was ballooning its RPI, distancing itself into relative obscurity. We know better. We know better and that’s why we’ve got twelve things to look forward to amongst so many other unlisted ones such as: When will Stanford have their big win? Their big loss? Can WSU climb out of the cellar? UCLA’s offense? USC’s offense? ASU? And yet still so much more.

We all seem to agree that Utah had a pretty good non-conference showing. I mean, they’re ranked in the Top-10, I really don’t need to go further. But what we don’t know much about is how this team operates – at a high level – with Jordan Loveridge. He returned to the tune of 14 and 3 – yay! – but that was against an NAIA school. This year was his proclaimed move to the 3 which is a move I’ve long felt is not in the best interest of the Utes. His absence has allowed them to play more athletically, garnering wins against smaller opponents like Wichita State and competitive showings against elite athletes like Kansas. Is getting Loveridge back a bad thing? Never. But it will have a significant impact on this team to reintroduce a guy who played 34 and 31 mpg in his previous two seasons. 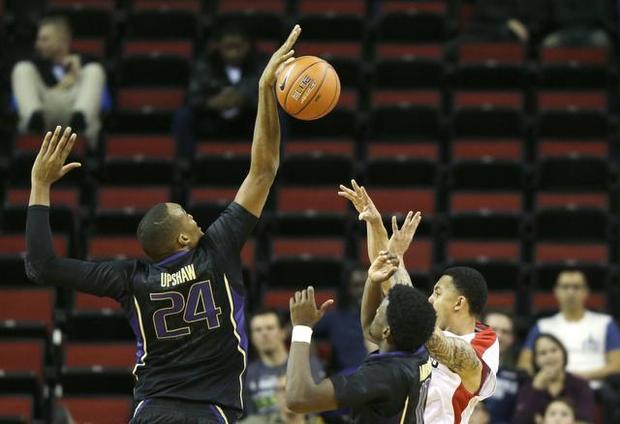 Yeah I’m calling him a POY candidate because I’m all for the POY being awarded to the conference’s MVP. In year’s past, this has been the case. Nick Johnson didn’t have the gaudiest numbers, but he was the most important player on the best team. MVP. Upshaw has transformed Washington’s defense. The program is making strides ahead of schedule. His minutes are relatively low – just 21mpg – but with the importance of conference play, expect to see his time on the court increase. And the conversation around the seven-footer as POY, too.

There’s a big post coming from Andrew Murawa at the RTC P12 microsite extensively looking at these guys. They’re wildly similar this season. But both are taking more threes than I think they should. Young is taking a career high percentage of shots from distance (53%) while hitting at his lowest 3FG% ever (33%). Randle is firing the second highest percentage of treys in his career (45%) and second lowest 3FG% (36%). They’re shooting more and making less. Bad math. Furhtermore, both are playing to a dramatically lower FTrate than a season ago. Each was seemingly a lot more aggressive last year. I urge them: Don’t settle. I love my senior guards, but I could use a little more Junior in these two.

When asked about the difference between rebuilding a second time and starting from scratch, this was Lorenzo Romar’s response:

Getting people to believe again if you’ve already experienced some success is easier than if you’ve never done it before. I feel like people knew that we had success here, and it was something that was going to be able to be achieved again because it had already happened.

Do you agree? I don’t. People wanted him out. His teams were playing unenthusiastically and he wasn’t recruiting. Washington attendance was at a LoRo low. Woof. But he’s suddenly got a top-20 team and their defense is amongst the best he’s ever coached. I called it the LoRo Revival. He’s brought things back which seems a tougher task than to start anew. To promise a whole new ceiling as opposed to noting, “Hey guys, we can make one sweet sixteen!” Nevertheless, they’re in a markedly improved situation. Of note: their non-conference schedule ranks 227th in KenPom, 179th however StatSheet calculates it, and 194th on ESPN’s Daily RPI. They have nice wins over SDSU and Oklahoma. Is this program revived or just beating up on the Stony Brooks of the world softer side of scheduling?

We lost two close ones in this tourney.. But don’t count us out. Don’t doubt us. Don’t think we don’t hear you talking trash behind our backs… We gonna do us and all you haters can kick rocks. We gonna fight till the very last game. We don’t need support cuz we got eachother. #TheCreator #Buffaloes

I’m here to tell you: I’m doubting Colorado. But there is encouragement in Xavier Johnson’s words. This team needs a wakeup call. I though it’d happen with an excitable Keg or in Honolulu. I was wrong. Maybe it will come with familiar foes? Conference play? I don’t know at this point, but if we’re to believe XJ, the Buffs have got each other. They also have Josh Scott, so get him the ball!

I’m not sure it was ever supposed to be a great offense – Cuonzo wants his teams to be tough minded rebounders. They’ve historically slowed the pace to glacial and rebounded like whoa. But what’s history got to do with it when your best offensive player – Jabari Bird – goes down with a foot injury? Sure, sure, sure, Ty Wallace is the best player on this team. He does a bit of everything – a very serious POY contender. But Cal’s ORtg with Jabari was 109. Without? 98. Bird’s best case scenario for return is in two weeks which would put him back and approaching game ready right about the time when my whole family comes out for the Cal-Arizona game. Sounds like great timing…

7. What kinda good is Arizona?

There was a time that they were being revered with Kentucky and Duke. No longer and deservedly so. The Wildcats seem to be a glorious construct of league-bound talent that’s still learning a complex defensive scheme with work still to do on its evolving offense. But that’s really just nitpicking. Arizona is really good. But what kind of good? Are they a 1-seed in the West? Or are they a geographically preferred 3-seed? An unfavorable 2? I want to see how this team galvanizes following the loss at UNLV. Back in November, Miller said his team had a defensive identity crisis, that they were lacking leadership. In losing to UNLV, both of these early November concerns were exposed. But in late December? After wins over Gonzaga and San Diego State? That’s concerning. The ceiling is still remarkably high in Tucson, but how – or even if – the Wildcats get there will be interesting to see.

BONUS: Is it time to bring Rondae Hollis-Jefferson into the starting lineup?

8. Jakob Poeltl and Stanley Johnson: Not the only freshman worth watching OR The bullet point where I note Kevon Looney and Dillon Brooks

Kevon Looney is averaging a double-double. Here are five other power forwards who didn’t do that:

Four of the above five were conference POYs. I don’t think Looney is a POY candidate (neither is Poeltl for that matter), but that’s impressive company. As for Dillon Brooks, he’s bearing the load of a veteran with the second highest usage amongst freshman (26%) coupled with the 28th best ORtg amongst everyone (109). FOY RACE!

Color me impressed and heading into conference play, I’m curious to see what comes of it. They’ve played essentially no one (340th in KP non-con SOS) in achieving 9-3 but that’s a lot better than anyone would’ve expected. I mean, they’ve halved their KenPom rating (226 to 112) and GP2 is great. I think we were all pretty excited about Tinkle Time, but maybe things are ahead of schedule. They’re not going to compete for a conference title, but they’ll make things interesting. As an added bonusHalf his tweets are about his family and:

Which is to say: How many will dance? Currently, KenPom rates the Pac 6th overall and last amongst conferences you really pay attention to not including the AAC (UConn is 6-5 if you’re curious). The worse the conference health, the fewer teams will dance. So if you’re cheering for a school not named Wildcats, Huskies, or Utes, now is gut-check time. You’re likely to only get five shots at these dance locks (assuming the unbalanced schedule ensures we don’t get what we want with a possibility of just 4 match ups). With such a log jam of mediocrity, however, the assumed result is a mid-level cannibalization and just four teams making the tournament, the fourth being whomever did not lose to Washington State.

Yeah, he’s going to call games and I’m going to love it. Here’s a link to his entire broadcasting schedule on his own website. And below is a screenshot of that schedule with every game where he’ll pronounce “POELTL” and effuse about Viennan sausages highlighted in red. For those of you who signed that miserable petition to ban Bill from calling Arizona games, I’ve conveniently highlighted those dates in blue for you to avoid. Happy watching: 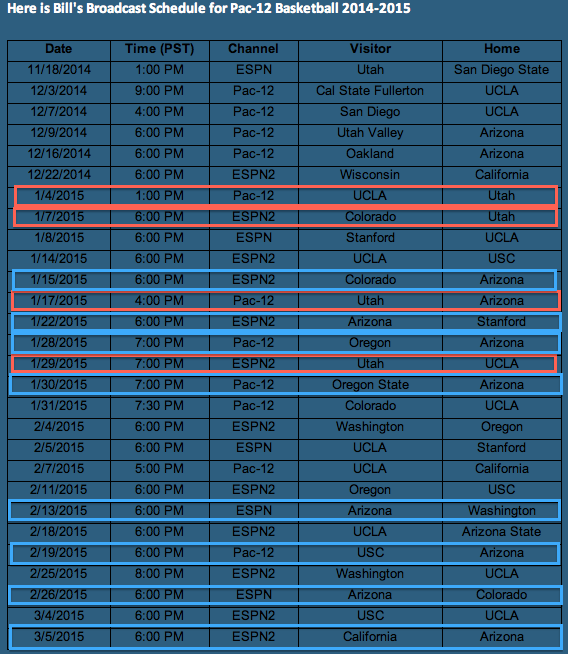 I annually urge you to get on the road. Go into hostile grounds and wear your team’s colors. Grab some friends. Make some new ones. Take advantage of the cities where your team is going to play. I’m going to (at least) Seattle this year and likely Boulder. You should, too.

And make an effort for Vegas.