Before embarking on our fourth week of Pac-12 play, allow me a brief State of the Pac address. SOTP, if you will:

We find ourselves in dire times. But three of us will be making leisure arrangements for our calendar’s third month. And this is unacceptable. A conference of champions must be represented by more than a fourth of its collectives. But let us not dwell on the have nots, for there is much that we have: A national player of the week, Top-15 representation, Wooden Candidates, and the power of twelve (still unclear what that could mean). In just over a week, we’ll dive behind the scenes; The Drive debuts – on the Networks – on January 28th. Before us, however, is another week amongst the familiar foes. We #BackThePac, for it’s what keeps us from rooting for Duke.

Despite excitedly anticipating this game for months, I will not be picking Arizona @ Stanford as the GotW. To be clear, first place is on the line and the Cardinal have been playing very good basketball. So too has Arizona. Dawkins’ crew nearly knocked off the Wildcats last year in Palo Alto, a feat they haven’t accomplished since 2009. Sean Miller has never lost to Stanford. And I love that Arizona has its toughest conference test (Utah) followed by its second toughest conference test (Stanford). But that’s not our game of the week.

Because if we’ve established our upper echelon of the conference – and Stanford is now a part of it – then we should focus ourselves on the grandest dog fight of the Middle Amoeba. This week, the most intriguing Middle Amoeba game is UCLA @ Oregon State. Betcha didn’t think we’d ever consider this game 2015 must see TV. I certainly didn’t. Nevertheless, these two are deadlocked in a fourth place tie with…Washington State. WTF?

I’m very hesitant to consider either of our 8pm PST, Thursday night tipoffs as games to avoid. Considering #Pac12AfterDark is seemingly alive and well, it’s difficult to turn an occupied eye to these contests no matter the competition. I had little interest in watching Oregon @ WSU last Thursday night until every single shot started falling and everyone stayed up well past Josh Hawkinson‘s bed time. This week I could see USC @ Oregon being a Thursday night shootout all over again. I could also not watch that game while commuting back from Palo Alto. But I could also catch that game – as well as the avoidable ASU @ Cal game – at The Old Pro. Who’s coming with me?

Washington’s season has been something like the Kansas-Oklahoma game Monday night. The Jayhawks bolted out to a monster lead before forfeiting that lead really quickly in the second half (Washington bolts to 11-0 then loses four-straight). Ultimately, the Jayhawks would prevail over Oklahoma – who remains the best team Washington has defeated. And that still means something. But so too do the losses the Huskies have since suffered. Like giving up a 20-point lead, the Dawgs still have enough time on the clock – plenty at that – to regain what they’ve seemingly lost. On their ski trip this week, the Dawgs have the chance to capture a coveted road win (particularly in Boulder) with upset on the mind against Utah (who is likely going to come out pretty worked up).

Also, Utah. I don’t think they have much to prove – they’ve fully proven themselves to me and in the scheme of things that’s really all that matters. The Washington schools are coming to visit which – despite the aforementioned uptick in Huskieball – isn’t the most intimidating task. Nevertheless, the Utes get to show they aren’t a 1.21 ppp defense and do so while #TakingCareOfBusinessAtHome.

Perhaps on the line this weekend in Boulder is the Colorado Buffaloes’ season. You know, nothing like a little mid-Jan hyperbole. They were swept out of Arizona, yielding greater than 1.13 points per every possession they tried to defend. It remains unclear whether or not Josh Scott will return. For certain, Xavier Johnson will not be playing Thursday and it’s not his ankle. He was sent home from the Arizona trip for an off-the-court matter. Jaron Hopkins and company have their work cut out for them and it has little to do with the exploitation of an Arizona defensive weakness. The Buffs have exposed themselves. How much are we going to see?

I can’t tell you the last time I attended an Arizona sporting event with my mother. While it’d be convenient for me to call this monumental, it’s really not. She just wants an excuse to come to San Francisco with her girlfriends (aka Dad’s buddy’s wives). She has chosen to not attend the second game of the weekend in Berkeley but has made countless dinner reservations. Have you ever walked Fillmore? Union? She’s not here for the game, but she’s keen on Sean Miller idioms and understands fan-tech in the Valley. 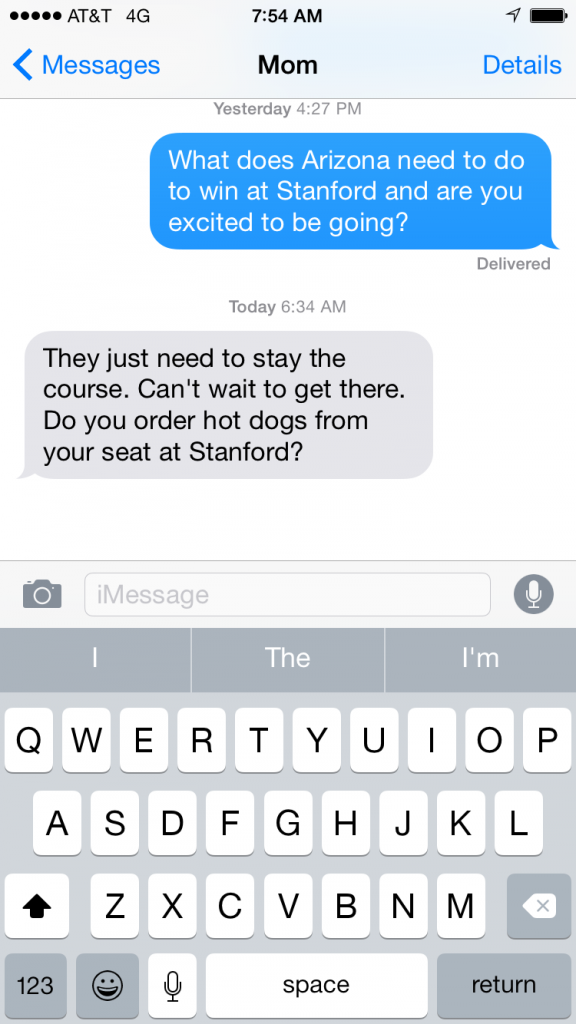