My high school baseball coach used to tell us that each day we either got better or worse. We never stayed the same. If that were the case, then we were expected to steadily improve. The goal to get better each day.

So maybe it’s OK that TJ McConnell struggled out of the gate. He was playing at a historically low offensive rate and Arizona didn’t look its presumed dominant self. His shooting percentages through the season’s first five games was flirting with devastation (31%). Everyone who proclaimed Arizona to be shooting inept was validated in their concern.

Yet now people are making a case for the point guard as the Pac-12’s Player of the Year. Sean Miller himself has alluded to it. Previous winner’s of the award have been lottery picks. McConnell averages 9 points per game. There is no need to go into the illogical quantification of his candidacy. By raw numbers, he’s not the Player of the Year.

But as he’s steadily improved, so too have his Wildcats. And make no mistake about it, they are his. Here is McConnell’s rolling five-game shooting averages:

Steady improvement. Things bottom out from three because – well – statistically in an analysis of five game segments, it’s difficult to maintain a pretty graph when there are five games in which he shoots 0-5 from distance.

But maybe that’s exactly the segment we need to review first? Because the fifth of that poor streak was a loss to UNLV. It included a road battle in El Paso. Two weeks later, Sean Miller inserted Rondae Hollis-Jefferson into the starting lineup and two weeks later, Arizona lost to Oregon State.

Because McConnell has only gotten better as the season has progressed. TJ McConnell is playing the best basketball of his career and Arizona catapults into KenPom’s top-3. Their offense steadily (theme?) creeping towards the most efficient under Miller. It’s already the quickest (16.2 seconds the average possession length ranks 25th nationally).

Whether his three point stroke is falling or not, McConnell has curbed the number of threes he’s taking. He’s on pace to take a career low 3FGA. It’s a good idea – he’s shooting a career low from that distance. Yet in a season where his ‘Cats are seeing every type of zone and packed lane imaginable, you’d hope he could take advantage. He has. Take a look at McConnell’s shot chart as provided, aggregated, and developed by ShotAnalytics.com: 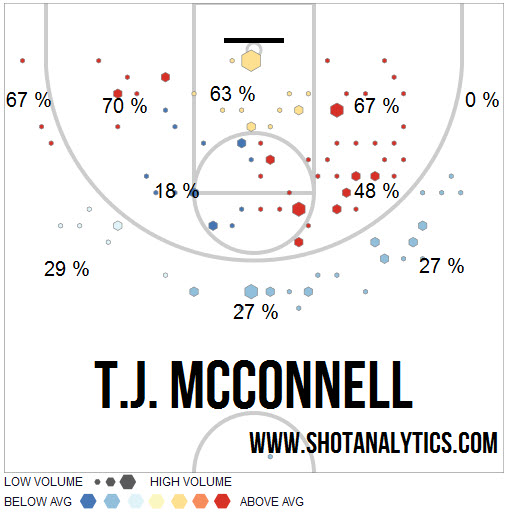 TJ is the mid-range master. The packed lanes are being picked apart by a high screen, dribble and shot. McConnell is shooting an aggregate 43% on 2-point jumpers. That’s 8 percentage points better than the national average. Half of his offense comes at this distance and just 10.8% of that offense is assisted which suggests that he’s capitalizing on what defenses are giving him and him alone.

And when they don’t, well we already know what he does in that realm. He currently leads the conference in assist rate (37.5%) which is good for 15th nationally and a career high.

But if we’re looking for the steadiest of improvements in the most important of realms, perhaps there’s one other place for McConnell to improve.

He’s still never been to a Final Four.