There he is. Just Jason Terry – amongst the most amicable, revered, and celebrated Arizona athletes of All-Time – celebrating. We’re not eulogizing him as I thought a lot of this celebration might become but rather remembering the fruits of his labors. I love that image because it’s the most fun guy having the most fun. Sports are fun. He’s the only Arizona player with NCAA and NBA rings (beat Mike Bibby’s Miami Heat in the 2011 finals as a member of the Dallas Mavericks).

Good on Greg Byrne for working with the Pac-12 and NCAA in order to make Thursday’s jersey retirement a reality. It’s long overdue. Of course we can’t ignore the delay in this ceremony. Terry took money from an agent. He paid it back. Are college sports pure? No. But competition is. It’s why Terry on the scorer’s table might be my favorite.

In other news, ASU is retiring James Harden’s number 13. I think it’s a questionable move (when you consider the other guy we’ve mentioned) but I also understand what Harden means to the Sun Devils. He played in just one NCAA tournament  but was also the 2009 Conference POY and is probably the best player in the NBA. Basically, in both Tucson and Tempe, it’s good the Rockets don’t play until Friday.

We won’t be following Gameday to Tucson here. As much as the ESPN morning show (all day show?) might want us there. We can, however, note that the Pac-12 needs to protect this series and ensure that Arizona and UCLA play twice every year with the hope for a third contest in Las Vegas. We’ve had just four Arizona-UCLA games the past two years which is a healthy number but a fortuitous one. Arizona and Colorado, meanwhile, have played 10 times the past 3 seasons. As Bill Walton might put it, not having this game twice a year “may be a violation of all the basic rules of human decency.” Of note, UCLA is amongst the tournament’s last four in and the Bruins already have one Lavinian win against #11 Utah. Should they make it two they’ll be squarely in. Not making this our GotW doesn’t diminish its individual importance, but rather we’re playing with bigger stakes in other places.

Which gets us to the actual Game of the Week because I really see Arizona running away with that one in Tucson. Utah @ Oregon. The game’s host, Oregon, continues to have their name mentioned in NCAA tournament conversations. Nothing helps solidify spots in the dance like beating a Top-10 team (Lavinian). Lately, these opportunities come infrequently in the Pac-12; however the Ducks find themselves with a chance to dance on their doorstep. Conversely, Utah has a chance to show some of the March Mettle that might be coming into question as we approach that month.

Mid-week, college hoops is the only game going. The NBA isn’t really back until Thursday so unless you’re behind on watching GIRLS (which had almost lost me with this season’s scattered plot lines and slow dominance of male characters which isn’t a bad thing but just tangential to the show’s initial premise), Looking (which week-to-week is just becoming Season 2 of GIRLS), and Togetherness (which is growing on me but I still can’t tell the depths of darkness or lightness is about to go down surrounding adult relationships which look increasingly depressing as it was brought to my attention that I’m closer to a character in Togetherness than GIRLS). Alas, if you’re all caught up, avoid Colorado @ Oregon State. There’s little on the line and it’s on P12N at 8pm on a Saturday. Of course if you come to @Luc and my friendship party to watch the aforementioned UCLA-Arizona game, we might just roll the Pac-12 festivities into that broadcast. You never know with internet friends.

Well Oregon State was supposed to prove something to us last weekend (could they win on the road?) and they didn’t. I guess what I need proven is whether or not a fringe Pac-12 team can do anything on the road. This week, my wandering eyes are settling on Steve Alford’s UCLA Bruins. Their contest in Tucson is a big one for them but not the most important. They have little more than something to prove to themselves in that game. But to the rest of us, I think UCLA has their tournament lives to prove on Wednesday in Tempe. The Sun Devils are playing some of their better basketball of the season (save a road loss to WSU in which the Cougs shot 60% in the comeback victory) and are hosting the quintessential trap game. Further, ASU is rated ahead of UCLA according to KenPom. UCLA is currently in according to Bracketology and is traveling to the Valentine State (Happy Belated!) for two games they won’t be favored in. If they want to hear their name called on Sunday, this is a great chance to prove it.

Cal just lost to Utah after winning five-straight, they have to be poised for another losing streak, right? That bodes well for Stanford who basically has their tournament chances to lose. That’s always at stake but this is getting increasingly serious. The Big Game (Saturday at 3:30 PST on P12N) is the first of three consecutive home games for the Cardinal which should be three wins presumably locking themselves into the NCAA tournament. We must presume because that’s what happens when you marry yourself to Texas athletics (see: Barnes, Rick; Football, Florida). For whatever Cal’s season has been, I suppose it means you can’t discount them from any given game. Alas, it wouldn’t hurt the Cardinal to have

So I got the full backstory of this one. The text was received while mom was at dinner with grandma. I real power meal. Mom read the text to grandma and grandma said, “OK, let’s really think this through.” Below is what they settled on for which I give them an A for both effort and ethics. 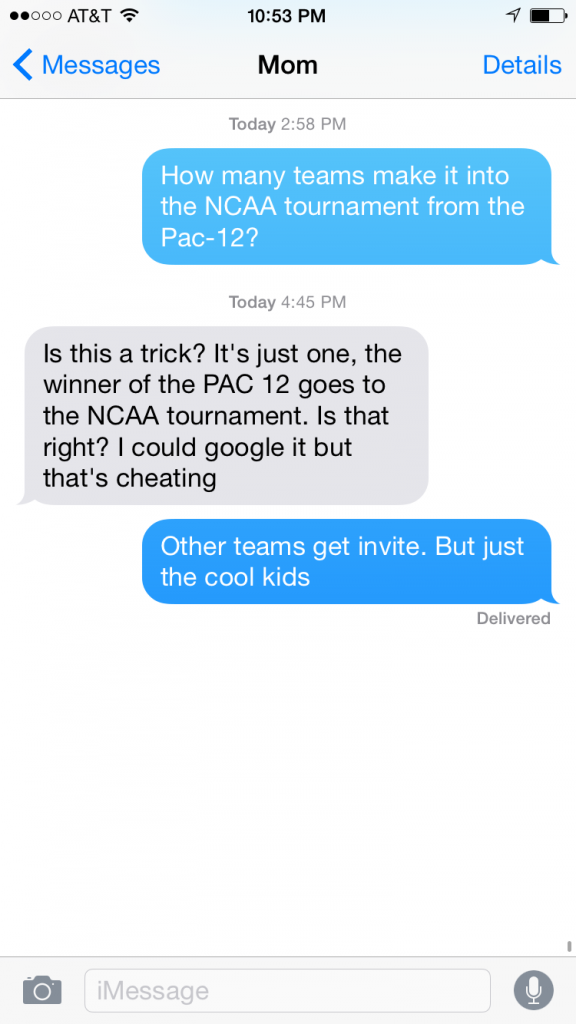