Let me begin by noting that this is far from scientific. In the future, I would like to expand on this data. There would probably be a lot of ways to examine it and no doubt some very interesting findings. But for the time being I had this small sample set (everyone loves to make decisions based on small sample sets, right?) and I thought I’d publish some of it.

Taking more shots at the rim would yield an improved offensive efficiency (Ortg).

I looked deep into this a few years back when Jordan Adams was leading the nation in Ortg (or something close to it). When I looked closer at his numbers, Adams had been taking fewer midrange shots and had drastically increased the number of shots at the rim he was taking. Also, I get curious about these things.

Again, a caveat. This is not nearly comprehensive enough. I’ve looked only at this season’s returning players which is far too few data points to draw conclusions. As offensive efficiency is a complex number and includes numbers to related to shooting exclusively, perhaps adding a column looking at change in effective FG% would be helpful. Next time. As caution: this is a very surface study.

Returning players filtered by percentage change of percentage of shots taken at the rim with corresponding change in offensive efficiency (2015 to 2016 seasons, data through Monday 12/14/2016 from kenpom.com and hoop-math.com) 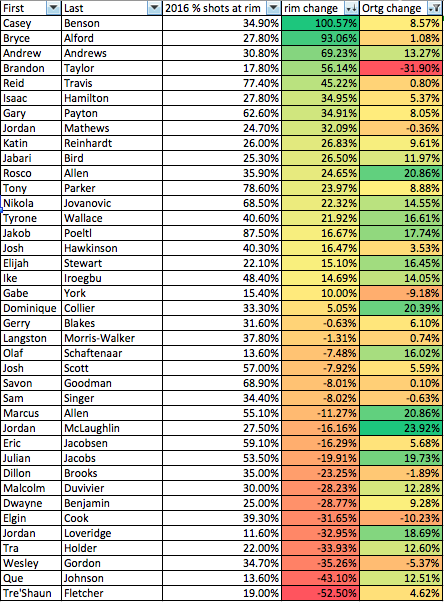 What could it all mean:

Right now nothing. There’s more to be examined, lots of numbers to be pulled. Next I have the time, I will. But enough deflecting.

What we see here, isn’t what I expected. Take Casey Benson, for example. The kid leads the conference in players improving the % of shots they take at the rim. He’s doubled that number yet his Ortg has improved a pedestrian 8.57%? Digging deeper, you’ll notice that Benson has the 6th lowest turnover rate (good for ORtg!) but is shooting just 22% from three (34% last year). One conclusion to make – if I hadn’t made it clear yet – is offensive rating is a complex number. Converse to Benson is Brandon Taylor. He’s improved his shots at the rim while his Ortg has dive bombed. Our leader in offensive improvement, Jordan McLaughlin, is taking nearly 12% fewer shots at the rim for dunk city.

It would seem, interestingly enough, that my hypothesis is incorrect. That there is just a small, nagative correlation between taking more shots at the rim and improving your offensive efficiency (-0.13 coefficient). Here’s what it all looks like:

Not what you expected right? I assumed – like I found with Jordan Adams two years ago – the correlation would be positive and high. It is instead negative and small. This feels like the point where you put a [sad face emoji].

This should lead to a deeper examination but hopefully you’ve found something to this.