Basketball is moving away from the mid-range shot. It’s calculated in many ways, the emergence of Synergy Sports (sponsor me??) certainly giving different context to the shot, but it’s indubitably the highest-risk, lowest reward attempt in the sport (aside from hiring a retread). It’s the Allegiant Air of jumpers, the fire-Mark-Richt of shots, the-sleeping-with-a-Kardashian of attemtps.

Much has been made of the Houston Rockets’ effective elimination of the shot, an analytical abolition to optimize the value of an offensive possession. Three points, after all, is greater than two, a two-foot attempt simpler than an eighteen-footer of the same “value” (two points). The mid-range attempt is an offense’s enemy.

Conversely, the same shot is a favorite for defenses. Considering the same value propositions, it’s the optimal shot a defense wants its opponent taking. When trying to stop a team from scoring, force your opponent to take that same high-risk, low-reward attempt you don’t want to take. It’s the driving principle behind Tony Bennett and Sean Miller’s pack-line defense and Jim Boeheim’s zone. Kentucky’s insane defense last year forced the majority of their opponents’ shots in this range, connecting on a feeble 27%.

In looking holistically across college basketball (and using hoop-math.com as our quantifier) the percentage of offense taken in the two-point range (non-layup or dunk) has steadily decreased over the past few seasons. Take a peak:

Layups, dunks, and threes are up. The mid-range is down. The rationale behind this trend, as we noted, is seemingly obvious. It’s also worth noting that achieving shots at the rim is no easy task – there are five guys standing in front of it – and making three-pointers is also difficult – just 33.9% of NCAA three point attempts are successfully being made this season (or roughly Ted Williams’ career batting average). This percentage is incidentally the lowest of the last five years. Furthermore, there’s been a greater emphasis on freedom of movement (easier to get to the rim or foul line) and the consistent evolution of the block/charge call. The arc is bigger than ever and defenses can be less aggressive around the rim. More rim-tacking.

Yet as the game trends towards beyond the arc and under the rim, it doesn’t mean the two-point jumper isn’t available. The aforementioned defensive schemes in fact encourage the attempt. Thus, any persons skilled in the 8-to-18 foot range have a distinct advantage.

Thomas Welsh is skilled at this shot.

The UCLA power forward or center or token-tall-guy-somewhere-in-the-middle-of-the-floor has connected on 46% of his career two-point jump shot attempts. That is a very high rate.

Context: The NCAA’s average FG% on two-point jumpers has been about 35% the last five years. Welsh is making 58% of his two-point jumpers this year. We must also note that 59% of Welsh’s career shot attempts have come at the 2-point jumper range which, when contextualized with Welsh’s shooting percentage at that range, means a Welsh two-point jumper is a higher value shot than most anyone else’ anything. He has never attempted a three. 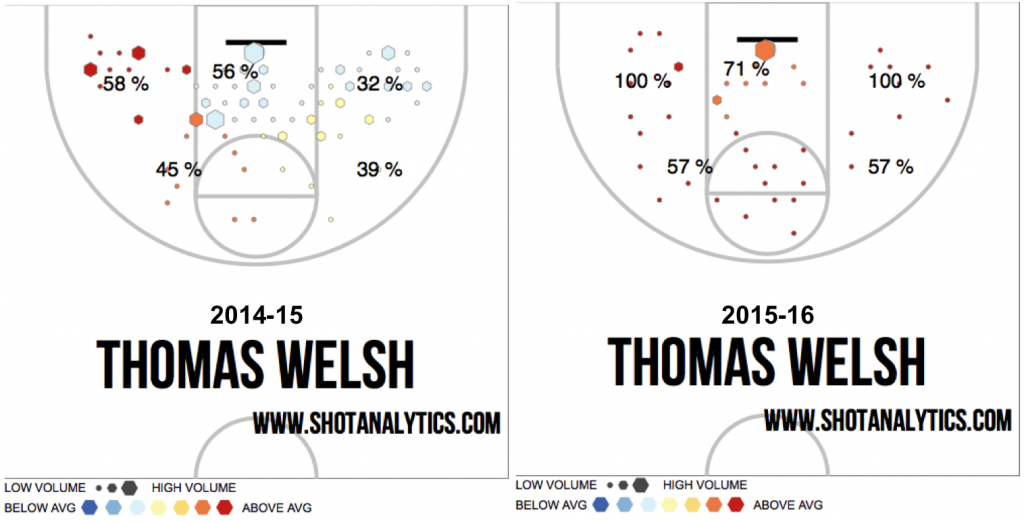 Within the context of Welsh’s own skill set, he is optimizing what he does well and serving the team’s benefit. When considering this skill, you might assume Welsh is drifting away from the hoop, limiting his ability to rebound on the offensive end. Not so fast my friend. Welsh has a competitive OR% (9.8%) which is actually a higher rate than Josh Scott, Nikola Jovanovic, Dwayne Benjamin, Josh Hawkinson, and Kaleb Tarczewski.

Of course Welsh isn’t creating this shot (i.e. Thomas Welsh is not taking step back baseline Js). Welsh’s contributions are often a byproduct of the team’s effort (as team sports do). So why is this a particularly critical skill for the Bruins? Consider Bryce Alford. The oft criticized point guard is ball dominant – for better or worse – and connects on just 44% of his shots at the rim (NCAA average is about 59%). Anecdotally we know that Alford is getting into the lane but he isn’t necessarily finishing there. So what, as a defense collapses to the rim on a driving Bryce, could he do? Find his newly freed big man, of course. Nearly every single one of Thomas’ 22 two-pointers have been assisted (95.5%). 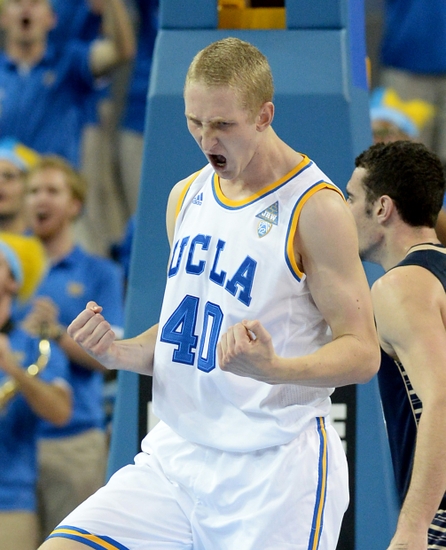 It is not a lost art but perhaps a faded one. The basic jumper – unglamorous in the age of Steph Curry posterizing people 25-feet from the basket – is still worth two points.

Here’s a list of other Pac-12ers with a propensity to make this less-than-sexy-but-highly-risky shot attempt (but seriously, look at how dominant Welsh is at the shot):

6 thoughts on “Thomas Welsh and the two-point jumper”