And what better way to describe the cornerstone of the four most successful seasons of Miller’s coaching career? Toughness – the requisite “nastiness” as it were – is paramount to the program and style Miller has built. It isn’t traditionally beautiful or particularly flashy. The necessary components of winning basketball are succinctly fulfilled and his teams have won. Kaleb Tarczewski has won.

Barring something heinous, the hulking center will finish his red-and-blue career with the most wins in Arizona basketball history.

Consider: Arizona has won 1,734 basketball games since program inception in 1905. That’s the 19th most wins in NCAA history. Kaleb Tarcezewski has been a part of more than 6% of those victories. 107 times Arizona has won with Kaleb in uniform. He’ll tie Matt Muehlbach for the most wins with a Wildcats sweep this weekend. 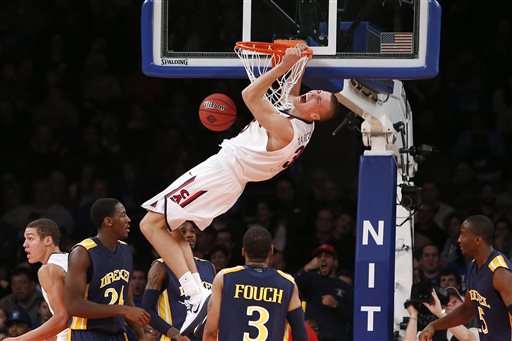 And I can’t even with your anecdotes. Neither his hands nor his potential will be pitted against him in appreciating what Kaleb has accomplished. Consider the prevalence of the pick-and-roll offense and how Kaleb can hedge (or set for that matter) a screen. A guard has but one direction to go: away.

For a man you can’t not see, Kaleb has done everything you don’t see.

It’s the stuff you can’t quite quantify but I’ll try my best because it’s all I’ve ever had in defending Kaleb.

For the last four years Arizona has ranked 14th, 13th, 1st, and 2nd in defensive rebounding percentage. For the last four years Arizona has ranked 10th, 17th, 11th, and 11th in allowing the lowest percentage of shots at the rim. Teams do not go near the rim against the Wildcats (the year prior to Kaleb they ranked 46th). That equates to 1,893 dunk or layup attempts during Kaleb’s Arizona career. For context, in the same time frame, the average NCAA defense allowed 2,750 drunk or layup attempts. That’s 31% fewer easy shots. Further context allows us that Arizona State allowed 1,522 layups or dunks to be made these past four seasons. Those are MAKES not just ATTEMPTS. And that included two seasons with the Pac-12’s all-time leading shot blocker, Jordan Bachynski.

Kaleb isn’t about flair or stardom. He is process. He is what his coach asked of him. What his team needed from him. There are limitations to his capabilities, we envisioned a one man wrecking crew with his stature and prospect ratings. But what is a winner without his flaws?

For the second consecutive year we celebrate the consummate Miller prototype. And with TJ McConnell it was obvious. The parallels were clear between him and his head coach. TJ could be our guy. Six-foot-one, scrappy and unable to fill out his form fitting Nike top. He bellowed at half court and we swooned.

With Kaleb it’s less linear. Fewer than 3000 people in the world are as big as Kaleb. Mathematically, anatomically he is not us. Kaleb turns around, bumps an opponent of elbow height and gets a ejected. He’s chiseled like a marble statue and it’s violently appropriate he’s incurred the nickname ZEUS. The Guile looking young man appears engineered. 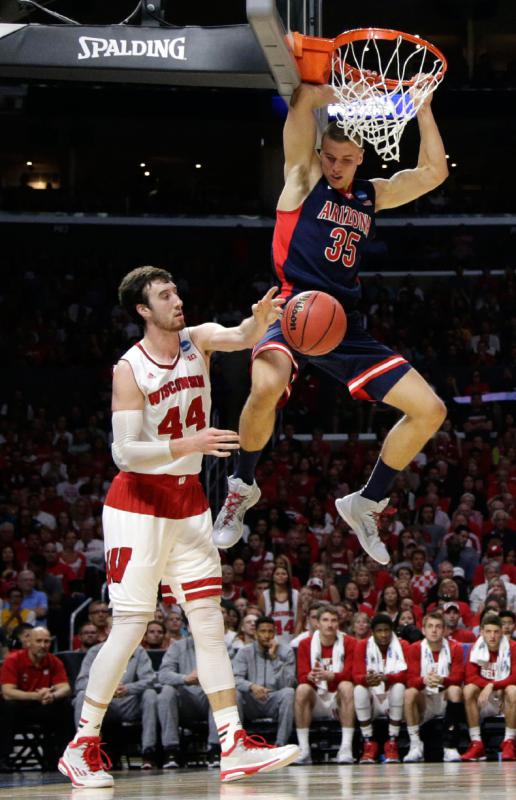 Zeus isn’t the affable monster and he isn’t the villainous great.

Uniquely and especially, Kaleb Tarczewski is himself. Not what we wanted, not what they wanted, but what his team needed: a center in the mold of his coach.

Last week my parents ran into Tarczewski at a restaurant in Tucson. My dad – as dads do, I suppose – asked him if he was familiar with the website “pachoops.” According to my father, Kaleb Tarczewski is familiar.

So, Kaleb, on the off chance you’re reading this: I hope that behind all that toughness was a lot of fun. I hope all 107 were the goddamn best. I hope the next handful are even more fun. I hope you get a chance in the NBA and I hope you get to enjoy that, too.

Congratulations on all of it and thanks.