But I’m not previewing Arizona’s visit to the Galen Center.

Look, the Pac-12 has ten marquee games this season. One was already played in Eugene and Dillon Brooks flexed his way to that win. Sources tell me neither Coach K commented. To clarify, marquee in this instance is defined as Arizona vs. UCLA vs. Oregon. Yes, I”m being dismissive of 206 contests. Such arrogance, however, begs the question: which of these three will drop a weird one? Nevertheless, on to Saturday:

I’m going to the game

I have bad seats at a poor rate and could buy two meals with the ticketing fees. Despite every goddamn podcast I listen to being sponsored by Seat Geek, we still can’t disrupt the fucking ticketing industry. But Ill be there. Wouldn’t trade it. I’ll be the one in red.

And I’ll be the one who’s there with brother for what are sports but a means to bring us together (seriously that’s a click-worthy link)?

Arizona is the 11th best transition defense in America.

According to synergy-sports (my new favorite toy) the Wildcats allow the 11th fewest points per transition possession. By rate, just 18% of offense against the Cats comes in transition (40th lowest nationally). Opponents are scoring at a measly 43.8% eFG (6th nationally). These results are an output of improved perimeter athleticism and diminished pace. This season marks Arizona’s longest average offensive possession length since 2011. What’s that mean? Sean’s squad has been more deliberate on the offensive side of the ball (seen A LOT of zone) and forced teams to defend.

UCLA eats transition defenses like they do offensive coordinators.

They take 30% of their offense in transition (12th most nationally) and connect at an absurd 62 eFG%. It’s technically not even their most effective scoring tactic but it leads to their outrageous pace, 76 possessions per game. And with scorers like they have, why wouldn’t they want more and more offensive possessions? If the strategy fits…

Which begs the question:

Does Arizona need to slow UCLA down?

It wouldn’t hurt but I’m not convinced it wins by turning this into a rock fight. Arizona’s offense has been 8% more efficient in their three highest paced contests. Their average game concludes with about 67 total possessions compared to UCLA’s 76. Conversely, UCLA’s three slowest games have yielded an outrageous 1.28 points per possession. They score whenever they want. I thus think – as is usually the case – the truth lies somewhere in the middle. Arizona is well equipped to diminish some of the Bruins’ pace (that transition D we discussed) while also able to control tempo offensively. UCLA’s inferior defense (ranked 100th) lends us to believe that Arizona will score. The Bruins just allowed 1.16 ppp at the Ski Schools, well above both team’s season average and parallel to Arizona’s.

This is a look at the UCLA shooting chart.

Presented to further elaborate the aforementioned challenge of defending UCLA because their fantastic transition offense accounts for just 30% of its attempts. Shot chart: 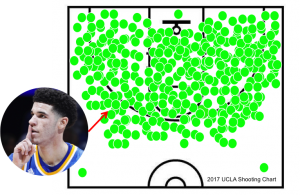 The Bruins have the nation’s top offense. Not transition, half-court, shooting, PnR or however else you’d like to measure offense. They’re the nation’s most efficient, complete offense. En total. They’re currently (2 months remaining) the second most efficient offense of the KenPom (2002) era. Scoring breakdown by FG% (national rank):

Impressive, no? Ask Kentucky and their 15th rated defense about it (Arizona’s rates 16th). 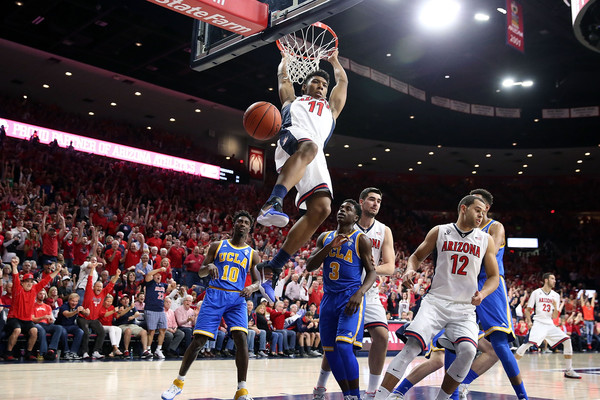 Did you read any Pac-12 previews that said Bryce Alford was good (this section will also include information on UCLA’s fantastic three-point shooting)?

To answer the question: I didn’t because I don’t usually read my own writing (ok I do!). Yet now that Bryce doesn’t have to be the primary ball handler, he’s making 79% of his assisted, no-dribble jumpers (synergy!). Let’s expand, however, as that’s a pretty narrow focus. In conference, for example, he’s already made 29 threes at a rate of 60%. He made 9 last week. In one game. At a senior season glimpse, Bryce is having career highs across the board and so while you don’t like Bryce Alford and that’s ok, you definitely can’t say he sucks. Come on.

As a team, UCLA makes 43% of its threes, about 11 makes and 25 attempts per contest. As you might have followed basketball trends, this propensity to make the game’s highest value shot has significantly contributed to such things as: a nation leading offensive efficiency, beating Colorado in The Keg despite CU taking 38 FTs, attendance and why you hate UCLA but watching them play might be your secret shame.

And this just can’t be ignored:

Sure, I could remind us that Arizona once again is an elite mid-range forcing defense (11th most mid-range jumpers forced). It’s the critical output of the pack-line defense Miller has brilliantly instilled in this team. But do we really think this makes Lonzo Ball uncomfortable? MAYBE KADEEM ALLEN AND A PLAYER’S PROGRAM THE TWITTER HAVE SOMETHING TO SAY ABOUT IT!

What can the Wildcats do about it?

Studies show that we can’t judge three-point defense by opponent FG%. This is unfortunate. Arizona’s opponents are shooting an outlandishly low 29% from distance this season. It’s the twelfth lowest in the country and second lowest of any Miller defense ever. So while I’d love to say that this has everything to do with X’s and O’s, it’s a lot more about the Johnny’s and Joe’s. That said, defenses can control a team’s volume of three point attempts. Strangely, this year’s Sean Miller pack-line is allowing a career high 36.5% of shot attempts to come from distance (perhaps the Steph-ening of our game?). This again doesn’t bode well for the Wildcats. If making threes is luck and Arizona isn’t necessarily limiting the attempt, then playing the nation’s top three point shooting team is a dubious task. Shit.

But Arizona can win and I’ve laid out a few of the ways they can do it above. To simplify, here are my keys to the game:

2 thoughts on “Arizona (and I) Visit UCLA on Saturday: Sports Preview”