Big announcement from WANE this week in that we’re headed to a Pacific Northwest near you. As you can imagine, these sad homers dive quickly into a discussion of Arizona’s weekend neglecting (to begin) buzzer beaters in Haas, UCLA and Duck bubble talk, Adam as a ‘scout’ but get their wits about them to go on some exciting tangents. Good pod.

END_OF_DOCUMENT_TOKEN_TO_BE_REPLACED

This post reads like a diamond looks at ryanrecker.com. You’ll recall Ryan is the one who did the dynamite podcast with Yahoo’s Dan Wetzel. Oh you don’t recall? Listen.

Seven to play and we’ve dropped one team – the UCLA Bruins – from title contention. If you’ll recall, two weeks ago we were faced with a feasible six-way tie atop the conference. This week’s fun fact – and I’ve stolen the odds makership from @sethkolloen and KenPom – lies with the 2.6% chance of a five-way first place tie. For your review:

So like I said, 2.6% chance, also known as slim and none. But hey, I still place a bet on my favorite roulette number once in awhile, too.

TV Complaint: A pair of blackouts (Cal @ USC, WSU @ UO) but let’s celebrate the fact that FSN is broadcasting a game online. Look, I won’t lie, I don’t hunt very hard for webcasts. The extent of my television research is on the Pac-12 website (probably a good resource, no?) and my Comcast remote. But this is the first I’ve seen, via the Pac-12 site, a game being aired on FOXsportsArizona.com so bravo to those guys followed by a swift “it’s about time.” The lines between television and web are swiftly being blurred (Hulu?) and it’s only a matter of time until sports catch up. But the fact remains, I’m still watching the best highlights via illegal youtube uploads. There’s a starving sports market out there and FSN is working at the pace of a Kevin O’Neill offense. Hustle up.

Game of the Weekend: With five teams in the thick of things, we could give the nod here to a couple of games. The Buffs in Tucson will be on ESPN and rematches a one-point game (join me on Kwarter to live chat this one) while Cal visiting UCLA intrigues me as the transplanted Bruins are undefeated at home. But Washington at Oregon is the GotW. Devoe Joseph is quietly putting together a POYish season and his Ducks are needing to hold serve at home after losing one to the beatable Beavers. Of course Washington’s road woes are no secret but maybe this is the year they shake that rep? And the Huskies are hot. Winners of five straight with all the confidence of a conference leader, why wouldn’t the Huskies make like dogs and mark their territory on that tree covered court? It’s a classic GotW: Ducks and Dawgs. Or something like that.

Game to Avoid: WSU at OSU. If this were a bowl game we’d call it The North Face Backpedalling and Wait for Next Year Bowl. Ken Bone’s Cougars aren’t getting any better without Faisal Aden. Sure he was grossly inefficient and they even played better in the games he didn’t appear in, but he gave this group a fighting chance (the Bay sweep!). Plus there’s the confounding Reggie Moore. Two years ago he was a legitimate candidate for FOY honors with Derrick Williams, it’s now been 747 days since he had a 20 point game. Of course that stat comes courtesy of this guy (in all seriousness, they do great work over at CougCenter). As for Oregon State, Craig’s team can beat anyone in the conference and have proven as much (UCLA, Cal, Oregon, OT loss in Tucson). But they’ve faded fast into irrelevancy. The wait-and-see portion hinges on the money-making prospects of Jared Cunningham. Dude’s good and according to Bozo, he should stay. Alas, these are two teams with little going the rest of 2012. Tune back in for the Pac-12 tournament when one of these two spoils someone’s season as well as my three-bid prediction. Speaking of the Pac-12 tourney, the Rumbling Buffalo literally played it out drawing names from a hat.

Something to Prove: Oregon’s season is on the line. They could easily be sitting next to Washington with a shiny 9-2 record but they dropped the ball at home against rival Oregon State and missed the ball in favor of Nate Tomlinson’s arm on the road at Colorado. Now they find themselves with the most difficult second half schedule (combined opponents’ record of 42-35, including UW, CU, Cal, Stan). Of course that treacherous route could be the rocky road to CBS airtime during the third month of the calendar year. But let’s not get ahead of ourselves. The Ducks are hosting the Washington schools and beating UW would be huge for their end-of-season prospects. Losing to the Huskies wouldn’t be a terrible hit but at this point Dana’s Ducks can’t afford to stub their beak at home. Of course losing to WSU (the spoilers) would take all the life out of the swoosh.

Something to Lose: The presumed favorite, Cal Bears, will be in LA this weekend. Certainly not the most daunting of road trips as you’re only going to play in front of a combined 5,000 spectators. But UCLA has been tough at “home.” They’re 4-0 in conference with a 17-point average margin of victory. They may be out of shape, dysfunctional, and falling apart but that’s an impressive stat especially in light of the fact that they’ve played those four home games in two different venues (Anaheim and Sports Arena). And did you see Josh Smith’s week 6? Biggun went for 24/9 and 19/5 while playing 20+ minutes in back-to-back Pac-12 games for the first time this season. The Bears, short Richard Solomon are reliant on this matchup to not get Joshed: 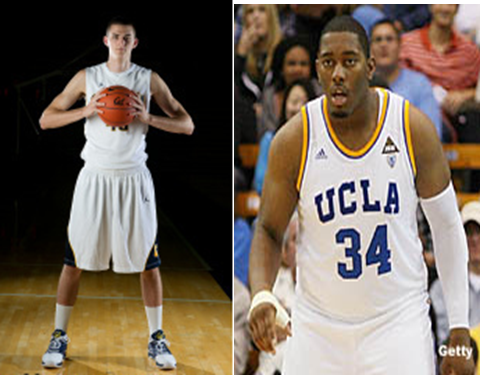 Good luck. But this is about what the Cal Bears have to lose: steam. A presumed (soft) lock for the NCAA tournament, beating teams – home or away – with an RPI that reads like a healthy systolic blood pressure is required. Sure, beating the Bruins won’t be easy, but it’s imperative. Should Monty’s crew falter, they’ll find themselves in the center of the weekly WTF happened Pac-12 debate and onto Lunardi’s bubble. This weekend isn’t defining for the Bears, but it could be a deflating one.

Weekend Youtuber: I think I’ve cited the fact that there are seven games remaining three or four times in this post. In summary: it’s crunch time, the home stretch, the two-minute drill. Inevitably, someone’s gonna need these:

As much heat as we like to pile on to guys like Lunardi who make NCAA projections and put themselves in the less than favorable position of getting nothing but hate from fan bases, Lunardi is pretty good at his job. He picks the field accurately and bases it on all the same NCAA selection committee criteria.

Examining his initial bracket, you’ll notice three Pac-12 teams: sixth seeded Stanford, eighth seeded Cal, and eleventh seeded Arizona. Only Cal was projected to actually play in the West region, Stanford was listed as “new to the bracket,” and Arizona’s stock was dropping.

With the important games of the OOC schedule over, this version of Bracketology is indicative of the Pac-12’s cap. The reality is that the Pac is a three team conference and is just a Stan/Cal/AZ home or bad road loss from being a two bid league.

None of the projected NCAA teams have done themselves any particular help since the season started: Cal was blown out on ESPN, Stanford hasn’t beaten anyone of particular relevance, and Arizona has had suspensions and dismissals galore. The rest of the conference hasn’t helped the overall RPI and eye test either: Utah is historically bad, ASU is brawling with mid-majors, UCLA is imploding, USC doesn’t score.

Oregon State is making an appeal to contend with Jared Cunningham flying high, a win over 9-2 Texas, and playing consistently good basketball. Alas, it’s still Oregon State who hasn’t had a winning season since 2005, lost to Idaho at home by 14, and I couldn’t even find stats going far enough back to discover their last winning conference season.

Needless to say, beyond a few teams, there hasn’t been a rich history or recent success out here.

[Deep inhale, deliberate exhale] It isn’t getting any better the rest of this year.

Back to the three projected dancers, Lunardi’s poor seeds for Pac-12 teams is about right and likely not going to change. Take last year’s Arizona team for example. They were 14-4 in a less-than-stellar Pac-10 with no marquee wins and a blowout loss to BYU (granted it was a pretty good BYU team but a spanking nonetheless). Those ‘Cats entered Selection Sunday with a 27-7 record and garnered just a five seed.

Three teams is a gift and if you’re looking for silver lining the best you’ll find is that those three teams control their destiny into the tournament. Their remaining schedule is favorable for any team looking to make it into the dance and they each earn a little extra on their leash by playing in a major/BCS conference.

Beyond that it’s indeed a very short leash for the (generous) five teams vying for (generous) three tickets to dance.