The following was passed to me late last week. It’s a photo of a letter to the editor of the Arizona Daily Star. The opinion of one, perhaps more, but here it is: 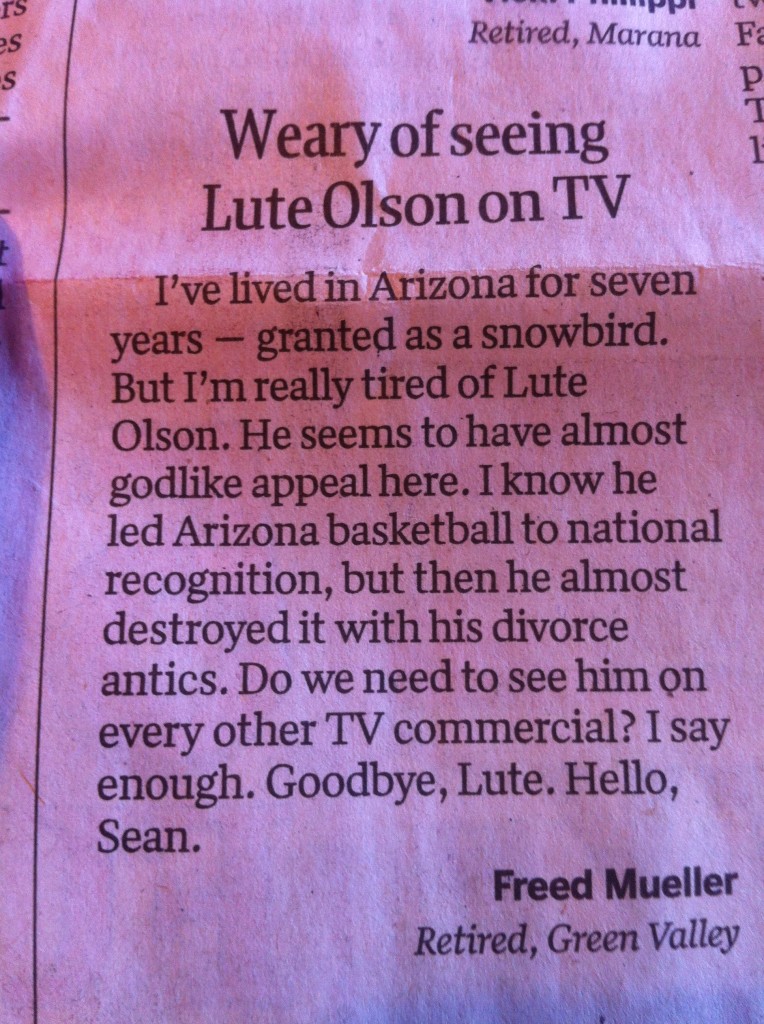 I respect opinions. I sincerely do. I want to hear yours so feel free to comment on the matter. I don’t completely intend for my response to be snarky though it became such. Maybe I’m a blinded homer. Maybe I just understand good business. I’m not picking fights here I just don’t see… whatever, here’s my opinion on the matter:

I appreciate you sharing your opinion on the presence of Olson in and around Tucson. You’re correct in recognizing that he brought Arizona to national recognition. That actually includes the 1997 National Title. You probably know this considering your cavalier citation of his marital history. Good for you. How quickly we forget his beloved late-wife, Bobbi. You know, the one the floor is named after. But you probably know all of this. I’m really sorry to hear that you’re tired of him.

And wouldn’t it be great to say hello to Sean? Fantastic young coach. You only have that chance because of Lute Olson. Sean Miller would be the first to tell you that. You’ve been here seven years so you’re probably familiar with Miller’s effusive speak on Olson and the history of the program he inherited. Speaking of your seven years, that’s all the time you’ve spent here. You are a self-proclaimed snowbird. You are, by definition, a fair-weather fan. So all of this makes a lot more sense. I hope you’re enjoying your winters here. I imagine you won’t soon tire of 79 degree Decembers.

And deification? Please, we can address this two-fold: 1) Arizona Basketball is a $15M+ business and it’s target audience looks a lot like Olson. Peak at the lower bowl of McKale. 2) Having a 79-year old man do the robot seems far from godlike and looks a lot more like a Credit Union having some fun…WITH THE MOST RECOGNIZABLE FACE IN TUCSON!

There’s a reason photos of leaders past line the walls of everything from the White House to the Rotary Club: We can’t get to where we’re going unless we know where we came from. I respect your opinion, Freed, but there’s a correlation between Olson’s presence and that tiny little number you see next to “Arizona” everywhere.

If that’s too much for you to handle, I hear there’s some fair-weather in Tampa, right next to Dickie V at the Hooters.