The Arizona Wildcats are a very good rebounding team.

I’ve lauded it and you’ve heard about it and pretty soon teams across the Pac-12 are going to experience that front court. It’s big and strong and imposing. Their offense is deliberately run to utilize that strength. Arizona is taking 74% of their shots from inside the arc. A significant change from last season’s 62.5%.

And back to the original point, they rebound the hell out of the basketball. They limit opponents to the the twelfth fewest offensive boards (meaning they clean the defensive glass) and grab offensive boards like corporate cookies out of a holiday gift basket. It’s December 18, you know what I’m talking about.

And who doesn’t love offensive boards (I’m impartial to the corporate cookies)? I mean, I often cite them as amongst the most frustrating plays in sports (along with the four pitch walk, double fault, and seven-ten split) but that just shows how incredible they are for the benefactor. Benefit and you love it. They are an extra possession that often results in easy buckets. Hooray easy buckets!

But Arizona isn’t making it easy on themselves.

Or maybe I didn’t say that right. They’re doing their darndest to make things easy on themselves, grabbing 43.3% of the shots they miss, but that’s where the ease stops. Anecdotally, we watched as the Wildcats missed seemingly countless second chance layups inside the Crisler Center as Michigan built their first-half-and-beyond lead:

Missed layups is a sustainable defense for only so long

The ‘Cats were getting the looks they presumably wanted but weren’t hitting. The same seemed to be happening a week prior against UNLV and so analysis seemed necessary. I’m all for perception being reality but if you have the data to back it up then you have a problem. Or at least a story. I like stories.

So I set out to tell the story of Arizona’s putback offense. Trusty hoop-math was consulted but Jeff doesn’t rank teams by their putting back abilities. So I headed over to KenPom and sorted for the top-10 OR% teams and then back to hoop-math for their accompanying eFG% on putbacks. The raw data:

Now let me say this first: This is incomplete research. Or rather I could’ve dove deeper and drawn up the numbers for 351 teams to better understand the trends around offensive rebounds and putbacks but PacHoops has a limited time, financial, and give-a-shit-about-Alcorn-State’s-offensive-fingerprint budget so I settled on ten. My apologies dataheads.

So per this sheet, the average top-10 OR% team has an eFG% of 52.2%. Arizona joins this group as the the third worst amongst the O-boarders in this eFG category: 43.1%. That’s bad. What’s more is the Wildcats are an average team at getting to the free throw line (rank 151 in the nation) to suggest they’re not even converting these extra attempts into free tosses. Look at Kentucky: they’re converting their extra possessions into quick buckets (67.6% eFG shooting is good) and they’re second in the nation in FTRate (62.9%).

So what could all of this mean for Arizona? I have a few thoughts.

First, Arizona takes a very low percentage of three pointers. Just 26.2% of their offense is from deep. Because of such, teams are less inclined to defend against that shot and could fill the lane. As Wildcats aren’t spending much time on the perimeter, they’re moving into the lane where they’re taking the bulk of their offense and grabbing anything they miss (we’ve covered that). So if the defense isn’t focused on defending the three and is filling the lane, Arizona, as a superior rebounding team, is obtaining their rebounds amongst more congestion than the average offensive rebound. These clusterboards would then lead to more contested putbacks which tend to be more difficult shots to hit, in effect lowering the team’s eFG% on putbacks.

This was quickly disproved by finding that just about each of those top-10 teams – whether hitting at a high putback clip or otherwise – was shooting a pretty low percentage of threes (average: 26.65% 3PA). Arizona was in the lower half of distance chuckers but it seems moot nonetheless. I understand that I’m dealing with a light sample set here, but this seemed to significantly suggest that Arizona might simply be missing putbacks. 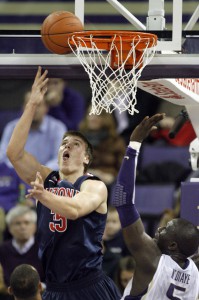 The second thought was to explore that Arizona is simply a fantastic rebounding team and not fantastic at the subsequent plays. Firstly, there’s no denying this team their distinction as great rebounders. They’re second in the nation in rebounding margin at +14.2 and everything else I’ve already said (#2 OR%, #12 defensive OR%). But if they’re missing all these putbacks, maybe they’re just diluting their offensive rebound numbers? This isn’t necessarily a bad thing but Arizona had 11 putback attempts against Michigan and the Wildcats made one. They had 17 offensive boards for the game. It’s strange considering this team has a top-50 eFG and doesn’t even shoot that many threes (key component of that equation).

As stated in the opening, the Wildcats run things deliberately on the offensive end which has essentially allowed them to be effective seemingly everywhere but on these putbacks. I’ve chosen to focus on there mostly because it just seems that Arizona has struggled with them. And now the numbers support such. By no means, however, am I going to argue that Arizona is doing a poor job of really anything. They’re setting themselves up for success and thus far they’ve been quite successful (11-0, #1 ranking, title contenders).

But what we’ve perhaps learned here today is that the Wildcats are leaving points on the board. That the number one team in the nation isn’t converting at a level they could on what tends to be a pretty easy shot to convert. Like my tweet above states, teams can only bank so long on Arizona missing shots from close in.

The good can only get better.

With this we introduce WANE: The PacHoops Podcast. It’s our first and we’ve been discussing getting this thing going for 10-months or 6-weeks depending on whether you ask me (Adam) or Spencer (Spencer). Give it a listen:

And whoa it was easy to produce. Now we’ll make no bones about it: E1S1 – On the Air at Last is raw as sushi but we got it up like grandpa with a blue pill. Like a tent in the rain. Like Askia Booker for the win. Because at PacHoops we don’t let perfection get in the way of done.

Enjoy. Here’s a table of talking points to find the exact insight you want. And by the way, WANE stands for we are not experts. Jam it:

4:53 – Spencer asks what the conference’s top story is and Adam says he takes his homer hat off but then talks about how great #1 Arizona is. It’s also roommate Tim’s first background noise appearance. He’s talking to a friend in Fiji. This is also the segment with a token “UW won the conference but didn’t make the NCAA tournament the Pac-12 was rock bottom” reference. Spencer pumps the Buffs.

9:56 – Transition to Cal and the whereabouts of Richard Solomon

10:08 – Tangent about the internet and the use of “Six Degrees of Schedule Separation” to navigate ESPN.

12:15 – Complete tangent on UC-Santa Barbara because we are not experts

19:12 – Awkward Stanford/Aaron Bright conversation. Feel bad for the senior missing out on his season.

23:48 – Transition to our closing segments the first of which is What does Adam want to talk about. You can hear Roommate Tim on the dishes while Adam talks about his trip to Ann Arbor to see Arizona @ Michigan on Saturday.

28:51 – What does Spencer want to talk about and so we discuss UW needing to get things going

31:11 – We stumble into the finish line like a marathoner.

These games are happening. Signed, sealed, delivered and booked I’m going to each of the following and if you want to join me you’re welcome to. Alright, not all of them are booked as I’m gonna strategically await that Black Friday SWA sale but I’m on board. Committed like R.P. McMurphy.

I watched a video posted to the Facebook by a good friend of mine. The poster played some college basketball and shares a passion for the game as many of us do; which is to say the video came from a trusted hoops source.

Unbridled joy for a simple game. And this doesn’t need to be basketball specific. I’m sure we could find Baseball Kid, Soccer Kid, Tennis Kid, Hide-n-Seek Kid, Imaginary Friend Kid, or any of an assortment of other kids so damn fired up about something they’ll suggest taping a cheetah to grandma’s back. But Basketball Kid helped with perspective; that this is a game and it is one that we love.

I mean, Adam made a shot while playing defense!

And while that’s a remarkable feat in and of itself, I want for us to be reminded that Andre Roberson was once Basketball Kid, too. He just wanted to play. After all, how much do you have to love hoops to play defense and rebound? Today he’s taking heat for trying to play, once and for all, at the highest level.

Grant Jerrett, too. Taking heat for the dream.

And I’m simplifying this stuff. I’m breaking it down to the easiest level of comprehension because deep down I want to be so naive that I think every competition I watch is a celebration of sport.

It’s why I had to look away during The Fab Five as they showed each of Chris Webber’s two long walks down that longest of corridors. I don’t care how much money he did or did not take from Ed Martin, that was Basketball Kid. He cared and he was genuinely hurt.

Perhaps the decisions of Roberson and Jerrett are misguided. Maybe they’re not setting themselves up for success but that’s not the point as they seek to fulfill their professional aspirations. Because if they really do have enough Basketball Kid in them, they’re going to be just fine.

Yes, I choose to be naive in these moments of perceived greed or self-interest because we’re not privy to the inner-workings of such a decision. Because we’re not far enough removed from One Shining Moment and because it’s not November yet.

Sure, the stakes are a touch higher than enjoying the swing set by your house, but Adam’s closing words ring true, “I love basketball.”

Well Adam, Grant and Andre do as well.

And me too, buddy.