Allow me to make a mountain out of a mole-scrimmage. As a rule, we shouldn’t read into scrimmages. They’re for entertainment purposes, a means to generate hype around the team, program, and season. I’m not talking about the “secret scrimmages” sealed as tight as a government drone policy. But I can’t help being shocked that in Stanford’s brief (20-minute) Cardinal vs. White scrimmage, one team managed to outscore the other by sixteen. I confess, this is nothing to be startled over. But the final score was 40-24 and it made sense but it didn’t. Like how do you evenly split your team into a blow out? Or why not pause and mix things up to allow for even play? It’s your scrimmage. Like I said, this is admittedly making a mountain out of a molehill but it just seems odd. Arizona’s Red-Blue game yielded an 8-point scoring difference, Cal’s was 3…in three overtimes. Of course Oregon State’s scrimmage was a 77-54 blowout (NOTE: the Beavers never scored 77 points in a Pac-12 game last season) so who really knows. But because the conversation of Stanford basketball has often been player development, I’m curious who’s learning from such a game? This type of competition? Of course I didn’t see the game and – by rule – we’re not to make anything of it. But this feels fittingly familiar for the least familiar Stanford team we’ve seen in awhile. Gone is the “core” that won two NIT titles and beat Kansas. Is that Stanford basketball? It might be. But this year really doesn’t project to anything “special” which at this point at Stanford is an 18-11 regular season, .500 ball in conference, and a strange post-season (but a post-season nonetheless I suppose).

Obviously in the words below I’ll dive into these Cardinal but I’d like to begin with Maples Pavilion. I grew up watching the backboards sway and the floors bounce. We’d turn down the TV volume as Arthur Lee’s Cardinal became Jason Terry’s daddy. We’ve seen Tiger act-a-fan court side (hated it but appreciated it). It’s an intimate venue and an easy place to catch a game. It should be every bit of the 3.5 point home court advantage and then some. Currently, however, it is not. The team hasn’t won at Monty levels in awhile and hasn’t been subsequently supported. It’s a shame because – living in the Bay Area – I want to see some rowdy. Do I really have to head to USF for Gonzaga’s visit?

Why I love them: Dwight Powell, Josh Huestis, Anthony Brown, Stefan Nastic, John Gage, and Aaron Bright. That was Johnny Dawkins’ 2010 recruiting class and every single one of them is on this team. “There’s unfinished business,” Dwight Powell says. You’re darn right there is and that’s coming out of a senior who just may be feeling the urgency of his imminent graduation. But boy do I love seniors and boy do I love seniors that are supported by a junior, Chasson Randle. This team has talent at every position and has the quintessential PG to run a Stanford basketball team. Then there’s the whole do-it-for-Andy storyline where these guys have a teammate, Andy Brown, who will be sorely missed from this team. This off-season he suffered his fourth ACL tear, ending his Cardinal career. He’s no longer on the team but promises to be he’ll continue to be a part of the team. Powerful stuff.

Why I hate them: They ain’t done shit! As stated, this is one helluva crew and I love their makeup and the things they appear to be capable of. But that aforementioned senior class is just 26-28 in Pac-12 play with two NIT appearances (I will begrudge them a 2012 NIT championship  but will also note they closed their season 5-8 to “earn” that un-invitational). College basketball is a dance recital and the Cards haven’t been dancing. Not since 2008 when there were two guys who looked alike who you might’ve heard of (Hi, Brook! Hi, Robin!). Maybe that’s why they signed Marcus and Malcolm Allen? No, shared DNA ain’t fixing this. And I’m not entirely sure I’m buying what Johnny Dawkins and Powell were telling us about what’s different for this team, “We’re thinking differently.” What does that even mean? The team did go through NAVY Seal training (see below) and have tested and pushed themselves in ways they supposedly have not before. I applaud that. I understand and appreciate culture shifts. I actually talked to a close friend who is a Red Sox fan about John Farrell’s work in Boston. He’s taken a dumpster fire and last place team with seven free agents to the World Series and baseball’s best record. Shifts are possible. But that also included a leadership change and that’s a path I never like to head down. I’m selling the “change of thinking” thing and buying – speculatively – the urgency of seniority.

That is the usage percentage returning to Maples this season. Compare that to the next most in Pac-12: Colorado’s 69%. Frankly, I’ve already gone in on this whole what-will-they-do-with-all-that-returning-skill thing so I’ll just say remind you they’re returning a 9-9 team.

In their words: My man, @kevo408, calls D-League hoops for the Santa Cruz Warriors, is all over the Pac-12 Post, and attended this here Stanford spot. Thanks, Danna Man.

Marcus is the scorer and Malcolm the passer from what I recall. Marcus is certainly more highly touted but I’m not sure they’ll be the major factors. It’s really a do-or-die year for the Card. They’re going to be tested early with Bucknell, BYU, Northwestern, a trip to Denver and UCONN. They’ll take on Beilein’s Wolverines in Brooklyn and could draw Pitt there as well in the Legends Classic. They haven’t proven yet they can close a team out. I can’t count the number of ways these guys lost games last year: Powell missing a DUNK down two at USC; Powell not knowing the clock and making the game tying layup after the buzzer; Randle fouling beyond mid-court with less than a second left in a tie ball game. Do they haveit? I don’t know. But I want to see them in the Dance.

“”I just want to thank all of my teammates.”
– Andy Brown

Outlook: I want desperately to say I like this team’s prospects but they return that 9-9 team that underwhelmed me season long (except when I saw them demolish Oregon). Have I mentioned that? Everyone else across the conference is rolling out rosters that  make the Cardinal an afterthought. I keep thinking about them and I can’t imagine three guys named Allen (Marcus, Malcolm, and Rosco) making a tournament changing impact. Which means that if we’re going to believe in these Cardinal, well we have to believe something different; the same approach Dawkins and team are taking. I’m all for mental fortitude I just don’t know if you can force it. I’ve seen my fair share of players asked to be leaders and get handed the How to Lead for Dummies book. That usually turns into a disingenuous, untrusted teammate. These aren’t bad guys. Just guys who are asked to be something they’re not (perhaps reference: Lyons, Mark). But I’ll tell you what, if any school was going to be clever enough to figure this stuff out… 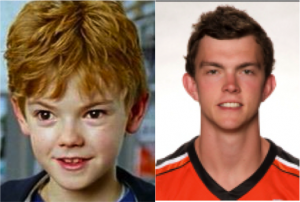 It was indeed a treat of a Halloween for the Pac-12. Before noon pacific, the conference had secured three huge commitments.

Dominic Artis committed to Oregon, Rosco Allen to Stanford, and Kaleb Tarczewski to Arizona. By Ballin’ is a Habit’s consensus rankings, that’s 61 to Eugene, 68 to Palo Alto, and 8 to Tucson.

The biggest treat of the day is Tarczewski who will bring immediate interior help to a young and developing Arizona frontcourt. He’ll be joining Sean Miller’s already impressive (tops in the nation) 2012 class including Brandon Ashley, Grant Jerrett, and Gabe York. From a talent standpoint, this is obviously a huge get for the Wildcats, but it’s an example of the rich getting richer – no Robin Hood here. Miller managed to swoop the big man right off Kansas front porch and I imagine he’ll have no regrets as the seven-footer owns the McKale paint.

Artis is a solid pickup for Oregon and is the second commitment from the Oakland Soldiers to commit to the school. Dana Altman will have Jabari Brown on this year’s roster. After de-commiting from UCLA last month, Artis had much of the west coast after him. Settling on Oregon his huge for Altman as he looks to establish his Ducks amongst the conference elite.

And then there’s Allen. A young man who grew a lot in a little time and somewhat lost his position. From wing to power forward, Allen is settling into his 6’8″ frame and should bring a very solid skill set to Johnny Dawkins’ Cardinal squad.

With the recent decline of Pac-12 hoops, I don’t think it’s a coincidence that Miller’s rapid recruiting successes have put heavy pressure on the rest of the conference to up its game. Granted, there has been somewhat of a absence of high school talent coming out of the west, but that hasn’t stopped Ben Howland this off season. He’s secured the nation’s #2 class, hauling in two East Coasters in Kyle Anderson (NJ) and Jordan Adams (GA). Success breeds success and today’s commitments is evidence of that.

As more and more talent stays or heads west, the better everyone will be. And maybe then, the conference can life up to its monicker: The Conference of Champions.