A week ago I was asked to rack my brain about the conference’s favorite newcomers. I answered with Gary Payton’s son, GP2. Other answers to the RTC Burning Q included Jakob Poeltl and Kevon Looney. Great responses. But noticeably missing was Washington’s Robert Upshaw and so I’m here now to note Upshaw’s newcomer significance and exactly what’s going on in Seatlle. The LoRo Revival, their newcomer defense.

Ranked for the first time since 2011 and since they weren’t invited to the 2012 NCAA tournament, Washington is good. But maybe it almost wasn’t. END_OF_DOCUMENT_TOKEN_TO_BE_REPLACED 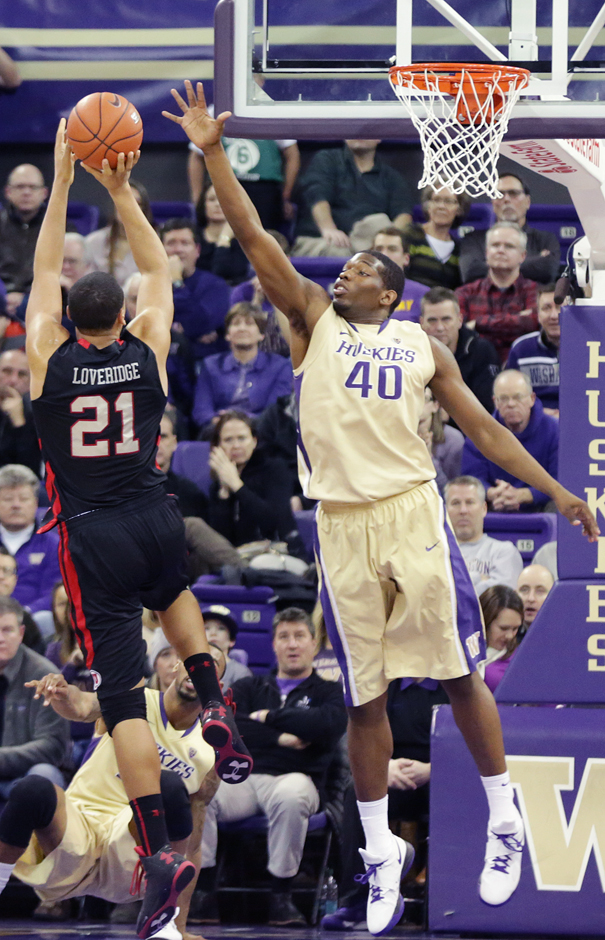 I didn’t have the opportunity to dive deeply into watching the Washington game. But even peripherally it appears that our concerns about Washington’s front court were affirmed by Tom Crean and company. The Dawgs yielded 102 points to Indiana despite trying to slow them in a zone (in stretches) and coughing up just nine turnovers. By most accounts, nine turnovers is a recipe for victory. The catch, is on the glass. Or otherwise said, a lack of catching, and this is where our front court hypothesis is affirmed

You see, while Washington only forfeit nine turnovers, they were out rebounded 50-29. Of those 50 boards, the Hoosiers snatched up 20 offensive boards and subsequently 20 additional possessions by which to approach the century mark. A mark they achieved.

We knew that Washington was going to miss the presence of Jernard Jarreau, but this much? Shawn Kemp Jr. joined us for nine minutes; or just long enough to commit five fouls but not long enough to grab more than one rebound. Giles Dieroidsajflkxvlkjasgcxz grabbed 100% more rebounds than Kemp (2). As I explained on a Daily Dose of Dyl (I start at the 4min mark) this week, Washington is still learning itself. JJ was to be a big piece of what they were doing and Nigel Williams-Goss is still getting his feet wet. CJ Wilcox is fantastic but he doesn’t necessarily create his own shot. Sure, Perris Blackwell has proven pretty formidable on the blocks (13/8). But if 20% of his offense is coming off of put backs, it suggests he’s still not a threat worthy of letting Wilcox get open.

More on the rebounding. Check this out and search for the patterns:

What’d you find? I’ll tell you what I found: get out rebounded and you’re likely to lose. In UW’s case, they’ve suffered this punishment twice and lived to see another day, once, when they danced with the Devil in Cameron Dollar form.

Austin Sefarian-Jenkins isn’t soon going to run out of the seven win tunnel to remedy this. He’s got an NFL draft to prepare for and Jon Brockman certainly isn’t on the way.

We knew the Dawgs were going to need some front court help. Who’s going to do it?

For whatever reason I’m compelled to open by citing that the Abdul Gaddy era in Washington has officially come to a close with…the emergence of a promising local, five-star point guard expected to be a game changer. Anyhow, the parallels are always funny but that’s the beautiful promise of change. And change the Huskies have, going all high-post offense and sh** while missing on Mike Moser and Aaron Gordon. But that’s neither here nor there. It’s Nigel-time.

Why I love them: I can’t figure out whether or not I love that there are Huskies named Nigel, Giles, and Perris. Those are some James Bond villains right there and have you seen Giles Dierickx’s bio pic? Allow me:

The guy’s name ends with three consonants. Three consecutive consonants is a sound. If a seven footer with an onomatopoetic closing to his last name doesn’t dispel some of the Huskies’ post issues, then I don’t know what will. If you listen to Romar, however, he feels it’s going to be Perris Blackwell – a USF transfer weighing in at 275lbs – who’s going to give the Dawgs a post presence they haven’t “had in years.” Romar told us he could threaten for leading scorer which is saying something considering the reason I really do love the Huskies is their guard play. CJ Wilcox can flat stroke it and carried this team for much of last season. He lead the team in both percentage of shots taken AND ORtg. Gotta like that combination. If nothing else, the thick bodies of Perris and Shawn Kemp Jr can set monster screens for that guy to get open. Additionally, his running mate doesn’t just have two first names, but rather TWO OF THE SAME NAMES! Andrew Andrews, folks.

Why I hate them: They’ve lost Aziz and really don’t have anything proven in the post besides a guy better recognized for his name than his game: Shawn Kemp, Jr. They run a high post offense which is to ask a lot of their bigs to be decision makers. Good decisions – like wisdom – generally come with age and familiarity and unfortunately the Husky frontcourt returns players who posted the following in % of minutes: 59.3% (Desmond Simmons), 37% (Kemp), 28.7% (Jernard Jarreau). Now, inexperience is not the kiss of death, but it sure ain’t helping me love the Huskies any more. Blackwell helps, though.

In their words: More coming here but the guest post was so damn well done it’s going to get it’s own posting.

That is the KenPom AdjT ranking of the 12-13 Huskies – their first in the high post offense. That  pace was the lowest a LoRo offense has ever ranked by 146 spots. That’s right, the previous LoRo slow was ranked 57th in the nation at 70. Last year they paced out at 65.7 – nearly the only ever Romar team in the 60s. Alas, after finishing 18-16, Romar has vowed to pick things up again.

“The heat will get hotter unless there’s a noticeable shift upward either this season or next. The good news for Washington is that freshman point guard Nigel Williams-Goss is the type of prospect who could spark a turnaround.” – CBS Sports’ UW preview

Outlook: These Dawgs are increasingly interesting as I absolutely love senior guards and the Huskies have CJ Wilcox. Their frontcourt pieces are intriguing but not necessarily promising like their backcourt. Nigel Williams-Goss is a pleasant addition and I always love a Lorenzo Romar offense. A season ago he was missing the depth to really get things going. It seems the Dawgs have the opportunity to regain some of that high octaine swagger we all know and love from Seattle. I don’t think Washington fights for a Pac-12 championship or really even much of an NCAA birth. They’re going to spend the season causing problems for people and then giving us a few head scratchers. They’ll pose a threat inside HecEd but I can’t see this group getting mentioned on a Sunday afternoon CBS show.