BREAKING: Stanford’s remaining home games will be moved to the Palo Alto Elementary School on the courts behind the permanent trailer next to the warmer of the two drinking fountains. Maples Pavilion will be used to safeguard Facebook employee windfalls.

OK, on to less enviable topics. The second half is here and, are you ready for it? The second bit of major news I’m going to drop on you in five lines of blog? A bold prediction:

Yeah, I said it and I can name names of the people who think I’m insane. But I think it’s going to happen. A few things are going to have to play out but they’re not entirely outlandish: Cal and UW repeat their first halves, Arizona/Colorado/Oregon jumps to 7-2 with a little run through Staples (not necessarily winning it all). But that’s it for prognostication for if we learned anything in the first half of this season, the Pac is un-Nostrodomis-able.

So allow us to tip this second half off with a full slate of games on both Thursday and Saturday. The schedule.

TV Complaint: The aforementioned full slate of classic Conference of Champions Thursday/Saturday games will include three blackouts (25%). While this continues to be frustrating, rest assured that the unviewable games are being delegated to the unviewables (ASU, Utah, USC) unlike the days when great games went unaired (Cal @ UW). But let’s run with the positivity bender dripping off my three-bid prognostication. Washington will be making their second straight appearance on ESPN Thursday night as UCLA comes for a visit and the games you’re going to want to see (AZ-Cal/Stanford, CU-Oregon) will be aired on the one and only Fox SportsNet. If the weather’s unfavorable, find yourself a cable, a cold one, and tweet me, I’ll be in Berkeley then Palo Alto.

Game of the Weekend: I think this one is an under-the-radar doozy. While everyone else is sleeping on the Pac-12 (or raining on it), Colorado and Oregon are legitimately fighting for a spot in the dance. The 6-3 foes (as of today and this entire segment may be for naught should either lose tonight), soundly in second place, have each sustained losses to the conference leaders and one lesser foe (UO lost to OSU at home, CU lost at UCLA), while maintaining an air of uncertainty about them. Can Boyle’s Boys win on the road? How far can Dana’s Ducks ride the hot hands of their seniors? Can either of these second year coaches really have this competitive of a team? So much questions and that is why they play the games. This particularly telling game will be played Saturday evening on the Root Network. It features two of my favorite players in the conference: Devoe Joseph and Carlon Brown. These two transfer seniors are playing like they’ve been in green/yellow and gold/black, respectively, for four years and are carrying their teams through bridge seasons. The under appreciated senior guard is perhaps my favorite position in sports and these two are about as fun as they get.

Game to Avoid: I’ve previously promised not to rain on the unviewables and seeing as how the majority of their games will not be on TV this weekend, I’ll pick on just one of the lowly three, ASU. But it shouldn’t be their fault that things, from an athletic standpoint, have fallen apart down on the farm. ASU should not bear the grunt for no one going to the Stanford-ASU game as no one goes to games down there. Uggh, it’s even frustrating to type it. Here’s the view from last year’s Arizona-Stanford game: 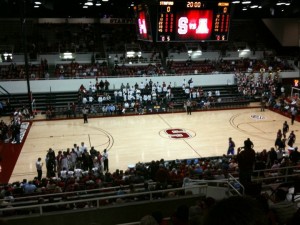 And Arizona was good! Alas, if no one’s going to go to the game, then no one should watch the game. Toss in the fact that Stanford has lost three straight and is losing steam, I’d recommend passing on the Cardinal Thursday night.

Something to Prove: For all the noise they’ve made for not winning games, the UCLA Bruins have a shot to win a few additional games (preferably not at their makeshift homes) and make a little something of this presumably lost season. They’ll of course have to kickoff this half of the season on the road with all eyes on them. ESPN has picked up their game against Washington so there will be nowhere for big Josh Smith, the Bruins’ three point ineptitude, and lack of guard depth to hide. Not to mention the Huskies are playing some pretty solid ball these days. UCLA isn’t a miserably bad team, they’re just a team that doesn’t quite have an identity – the same holds true for much of this conference. But for the Bruins to indeed do something about their season with nine to play, they’re going to have to work for it. It’ll have to start on the road and what better place than Sea-town?

Something to Lose: The Block, Part II put UW back into the conversations they used to be a part of as one of the most talented teams in the conference if not coast. Have you seen Terrence Ross play? Did you notice the way Tony Wroten commands the floor? Woof this team is good and they’re hot as a pistol after leaving Tucson. But their season may still be a little bit like this tweet from their football coach. Odd, no? Alas, I’m buying Husky stock because they have a cakewalk of a second half schedule. They don’t play either of the Bay schools, already made the Ski and Desert trips, and play an unviewable or WSU or OSU in five of their final nine. So while I build ’em up, build ’em up, build ’em up, allow me to ask: am I setting them up for failure? Have they set themselves up for failure? He may have the court presence of a Greek God but Wroten can’t turn the ball over five times a game if he’s going to have the ball for more than a third of UW’s possessions. And Terrence Ross, the talent-of-talents, cannot disappear like he has. CJ Wilcox didn’t practice this week with a sore foot (he’d missed three games with the injury before playing in Arizona) but this team could use him back. Like I’ve said, this team ain’t bad – at all – but they’re still a LoRo team and a home split to the LA schools would not behoove the impression of Washington’s legitimacy and certainly not their resume. I’ll decide on some special award for the first team not named Utah to lose to USC.

Weekend YouTuber: Oh that furry little chubster is going to crawl out of his burrow and see something but it’s generally irrelevant because we’re here on the best coast and it’s probably sunny and warm where you’re at or sunny and ski-worthy. There may be just a single win over a top-50 RPI squad but at least we’re not in Pittsburgh. Plus, Bill Murray’s kid was on the Arizona staff for a bit. Everyone’s a winner when there’s more Bill Murray: